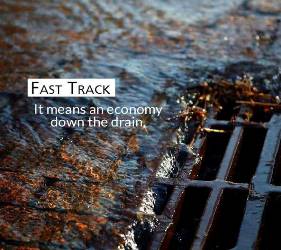 The U.S. House of Representatives voted 218 to 208 to narrowly advance Fast Track, or Trade Promotion Authority (TPA), for the Trans-Pacific Partnership (TPP) on Thursday. The Fast Track bill now goes to the Senate. Left unanswered is what will happen to Trade Adjustment Assistance (TAA) for workers hurt by bad trade agreements.  TAA was soundly defeated in the House last week and some Senate Democrats who voted for Fast Track in the past have indicated that they will not do so again without TAA.

“Every effort has been made to run around the democratic process and deny the input of the American people,” said IAM International President Tom Buffenbarger. “The voices of millions of working Americans are being silenced by backroom deals in Washington, DC. The IAM and a strong coalition of labor, community and environmental interests will continue to fight this undemocratic and job-killing trade deal in the Senate.”

The legislative package including Fast Track, but without TAA, now goes back to the U.S. Senate, where we will need to once again aim our sights to defeat it.