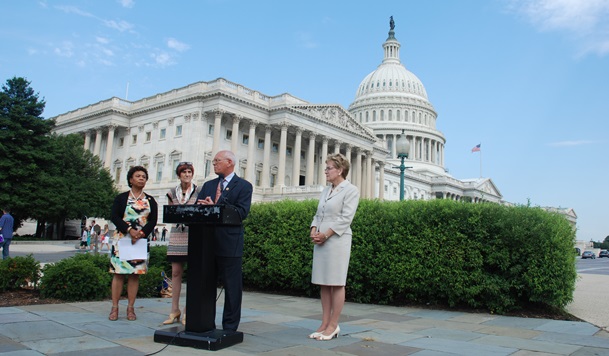 A group of House Democrats are calling on the office of the U.S. Trade Representative (USTR) to stop using misleading export numbers when making its case for future trade agreements, like the Trans-Pacific Partnership (TPP), which is currently being negotiated in secret.

The USTR currently recognizes “re-exports,” or goods that are imported from another country, like China, to the United States and then immediately exported to another, as authentic American exports.

“They’re playing games with the data,” said Rep. Paul Tonko (D-NY) at a press conference on Capitol Hill. “We’re here calling upon USTR to provide accurate information – data that are telling us the true story. As we go forward with trade agreements, it’s appropriate to have this done correctly and appropriately.”

Tonko, along with Reps. Rosa DeLauro (D-CT), Barbara Lee (D-CA), Marcy Kaptur (D-OH) and other House Democrats, have been pressuring the USTR since April to use a more accurate set of data from the U.S. International Trade Commission (USITC), which removes re-exports, and paints a more realistic picture of the U.S. trade balance.

According to the USTR data that includes re-exports, the U.S. had an $85 billion trade deficit in 2013. That figure balloons to $177 billion if re-exports are cut out of the data.

“These are not U.S. made goods. Why are we spinning it and fooling ourselves?” asked Rep. DeLauro. “They do not create jobs here. They inflate export numbers to make these trade deals look better for our economy.”

Click here for a Public Citizen report showing how the USTR has used faulty export numbers to defend the U.S.-Korea free trade agreement, which has swelled the U.S. trade deficit with Korea by 50 percent in its first two years.