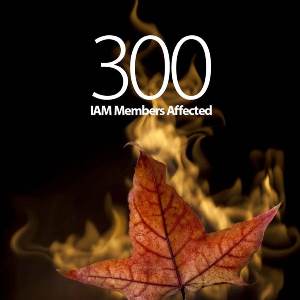 A continued state of emergency exists in Alberta as one of the most devastating fires in Canada’s history continues to burn out of control in Fort McMurray and the surrounding area.

Two traffic deaths have been reported and the entire population of 88,000 residents was evacuated from the city after 2,400 homes and other structures were destroyed. An estimated 500,000 acres have been consumed in the province.

“We have 300 IAM Local Lodge 99 members living in that community and an additional 300 members commute to the region daily,” said IAM Canadian General Vice President Stan Pickthall. “Our thoughts and prayers go out to all of our members and the entire community of Fort McMurray.”

Most of the IAM members, employed by Finning International, overhaul and repair heavy equipment used in the nearby oil sands development. This is a devastating blow to an already hard-hit community.

“Northern Alberta and the oil sands community of Fort McMurray have seen significant job losses over the past year or so, and this disaster could not have come at a worst time,” said Pickthall. “As this event unfolds, we watch and hope that this disaster is soon at an end and the city and our members can soon return to their lives and some extent of normalcy.”

IAM International President Bob Martinez and IAM General Secretary-Treasurer Dora Cervantes expressed the union’s pledge of solidarity and support in an open letter to staff and leaders across North America.

“Given the destructive nature of this tragic incident and the continuous outbreak of extreme weather events impacting our members, we ask for your continued consideration for all IAM members as they endure the wrath of disastrous events,” said Martinez and Cervantes. “Our members are in need – they need your help.”

The IAM Disaster Relief Fund was established as an easy way for members to help members and their families who endure hardships as a result of natural disasters. Click here to donate online. If you have questions, call the IAM Retirees, Community and Membership Services Department at 301-967-4717.

As the week began, cooler weather and favorable wind conditions have aided firefighters but officials believe that the fire could continue to burn for months in remote areas. It could also take several weeks before residents can return to their homes and community to assess the damage.