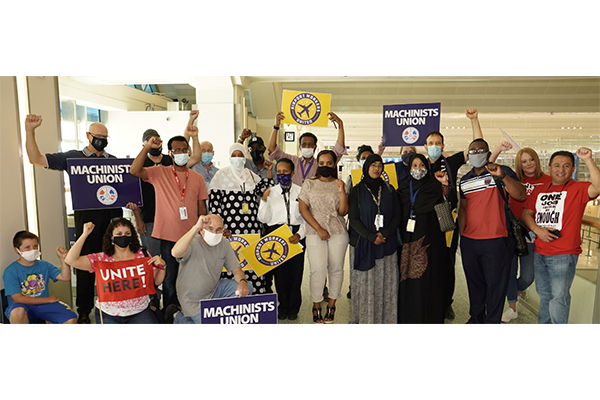 On July 1, IAM District 77 joined a coalition of unions and workers at Minneapolis-Saint Paul International Airport in a press conference commemorating the airport’s minimum wage increase to $14.25 an hour. The raise is the second of three that will bring thousands of workers from $11 an hour in October 2020 to $15 an hour in July 2022. The IAM was the first union in Minnesota to support the fight for better wages at MSP.

“When we started this campaign, people thought we were crazy to demand those kind of wages, but through solidarity and collective action we not only moved the needle of public opinion, but here we are today celebrating yet again another big raise,” said IAM District 77 Directing Business Representative John Steigauf.

Airport workers from SEIU Local 26, UNITE-HERE Local 17 and Teamsters Local 120 also spoke about how the raises make a drastic difference in their ability to provide for their families and feel dignity in their work.

“The Machinists Union was again at the forefront of the fight to better workers’ lives,” said IAM Midwest Territory General Vice President Steve Galloway. “I commend District 77 for helping to achieve this historic win for airport workers in Minneapolis. The IAM will continue to lead the labor movement in its quest to better the livelihoods of all workers.”

Kip Hedges, a Delta baggage handler and leader of an organizing effort to join the Machinists Union, was fired in late 2014 for speaking out about the plight of low wage workers at the airport. Hedges, Richard Ryan, who was then Assistant Directing Business Representative, and many other local Machinists worked together to pass resolutions through the Minnesota State Council of Machinists, the Minnesota AFL-CIO Convention and dozens of other unions.

Initially, the resolutions only pertained to wages at MSP, but activists quickly built momentum to win support for a $15 an hour minimum wage for all workers in Minnesota.

“Our union is proud to have supported this essential fight with our pocketbooks and by putting our feet on the street,” added Steigauf. “They call us the Fighting Machinists and we won’t stop fighting until every worker has a living wage, no matter what we look like, where we come from, or how we pray.”