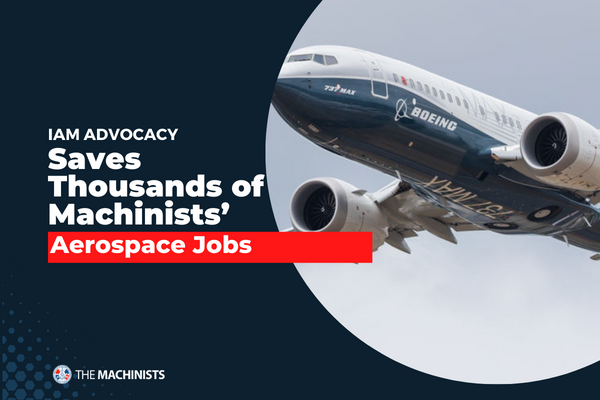 As a result of intense lobbying by the IAM, Congress recently reached an agreement on an end-of-year government spending bill that included an amendment granting Boeing a modification to the certification deadline which would allow the 737 MAX 7 and MAX 10 jets to complete aircraft certification without major disruptions. The amendment, which includes several mandatory safety enhancements, protects thousands of Machinists’ jobs by ensuring a deadline included in legislation passed in 2020 does not apply to the MAX 7 and MAX 10 models that have yet to enter service.

The actions of the federal lawmakers came just days after IAM International President Robert Martinez Jr. sent letters to the Biden Administration, Majority Leader Chuck Schumer, and Speaker Nancy Pelosi urging them to support legislative and administrative remedies to modify the deadline for the Boeing 737 MAX-10 and MAX-7 programs to attain the certification of the flight crew alerting system, as mandated under the Aircraft Certification, Safety and Accountability Act (ACSAA) of 2020.

“This Machinists Union relentlessly fought for this extension that will ensure the livelihoods of thousands of Machinists in the aerospace sector,” said IAM International President Robert Martinez Jr. “I applaud Senator Maria Cantwell for developing this amendment and Congress for supporting it. This will allow the MAX-10 and MAX-7 variants an opportunity to complete the certification process without jeopardizing aircraft safety.”

“The amendment affords our Machinists members at Boeing the stability and security they deserve,” said IAM Western Territory General Vice President Gary R. Allen. “Machinists play a vital role on the frontlines of the aerospace industry by building and producing some of the best aircraft in the world. I commend IP Martinez and our Legislative Department for this achievement.”

“This is great news and a relief to our members who prove every day that they are the most skilled to build these new aircraft,” said IAM District 751 President and Directing Business Representative Jon Holden. “I want to thank International President Martinez, GVP Allen, our Legislative Department, and all Machinists who fought for this certification process of the Max 7 and Max 10.”

President Biden signed the spending bill into law days ago.

The IAM will continue to work with the Biden Administration to further aviation safety, the efficiency of the aircraft safety certification process, and the superiority of the domestic aerospace manufacturing industry.