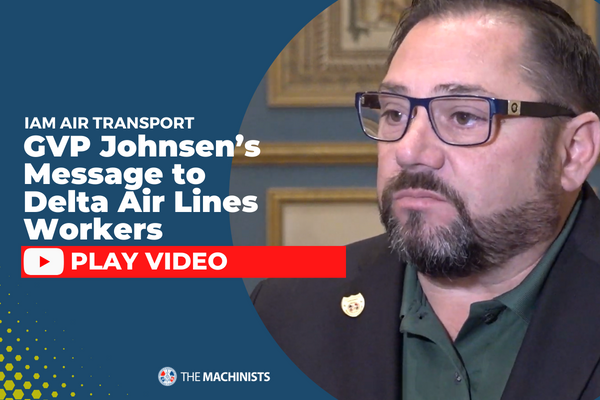 My name is Richie Johnsen. I’m the General Vice President for the Air Transport Territory of the International Association of Machinists and Aerospace Workers (IAM). You may have heard by now that three unions are combining resources to unionize workers at Delta Air Lines.

The Machinists Union will take on the Ramp, with the Teamsters (IBT) organizing Tech Ops and the Association of Flight Attendants (AFA-CWA) organizing the Flight Attendants. I’m excited about this kind of unity and what it means for Ramp and Cargo workers at Delta. Having a union is a real possibility.

READ: Unions team up in an attempt to organize thousands of Delta workers | Atlanta Journal-Constitution

Delta workers come to work every day and do an industry-leading job only to face short staffing and injury. The quality of work life is becoming intolerable in many stations. The pace of work is crushing. Arbitrary discipline and favoritism only add to the problem.

In turn, this affects your quality of life away from work. They say they value your opinion, but it’s clear they don’t. They change conditions of employment at the drop of a hat.

It’s time for things to change. They can change with a union. With a union contract, Delta won’t be able to change vacation accrual schedules or anything else unilaterally because, with a union, you have a voice in determining your destiny. With a union comes a union safety committee that can fight for adequate staffing, proper and well-maintained equipment, and union representatives whom you elect and fight for you—not corporate shareholders.

With a union, you can have a secure retirement with a pension and a 401(k), just like tens of thousands of IAM members already have. A union contract can give you protection from mandatory overtime, easier access to paid personal time, and better vacation language. Delta employees provide top-of-the-line customer service, and it’s only right that you get industry-leading wages to match.

I’m excited to work shoulder-to-shoulder with you in the coming months. I hope to meet many of you as we bring a union to this property.

You will soon receive two cards in an envelope—one for you to return to the IAM and one to give to a co-worker. A better, more prosperous, and secure future is right around the corner.