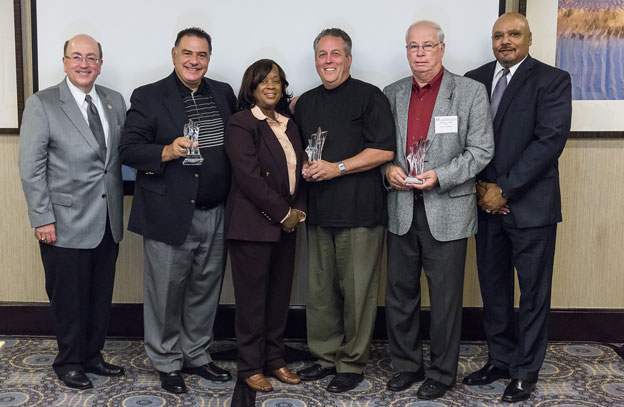 The 2014 IAM Automotive Conference in Fort Lauderdale, FL brought together IAM representatives and activists from North America’s automotive and trucking industries to assess the state of the industry six years after its collision with the 2008 Recession and to plan bargaining and organizing strategies for the future.

A host of distinguished speakers, including IAM International President Tom Buffenbarger, General Vice President Diane Babineaux, Rosemary Shahan, president of Consumers for Auto Reliability and Safety, Damien Anderson from the IAM National Pension Fund and David White, Assistant Director of the IAM Strategic Resources Department, updated delegates on the state of the industry and the union

Shahan’s presentation included a report about their organization’s petition campaign against CarMax, the largest used-car retailer in the U.S., for not fixing cars with safety recalls before selling them to consumers. Click here for more information and to sign the campaign petition.

Anderson updated delegates on developments in the auto and trucking industries, including ratification of two national agreements covering 5,000 technicians at UPS and UPS Freight, a potential million-dollar back-pay win for drivers at Unimark Truck Transport who were being misclassified as independent contractors, and another major back-pay and work-rule arbitration win at Auto Truck Transport for more than 600 drivers.

In organizing, the IAM has several opportunities following a court decision that ruled FedEx Ground drivers were employees, not independent contractors, under California and Oregon law. Similar cases have been filed in 40 other states in the last 10 years. And, the IAM is launching a campaign for Con-way Freight workers, a major transportation and trucking company.

“The IAM has a lot to offer technicians in the auto and trucking industry,” said Anderson. “We have a great pension plan and a health and welfare plan that can help us organize smaller dealerships. And we are going to build on our success at UPS and focus on large freight and shipping companies like FedEx Ground and Con-way. As the auto and trucking industries continue to recover, we will be there to protect our members and organize new ones.”