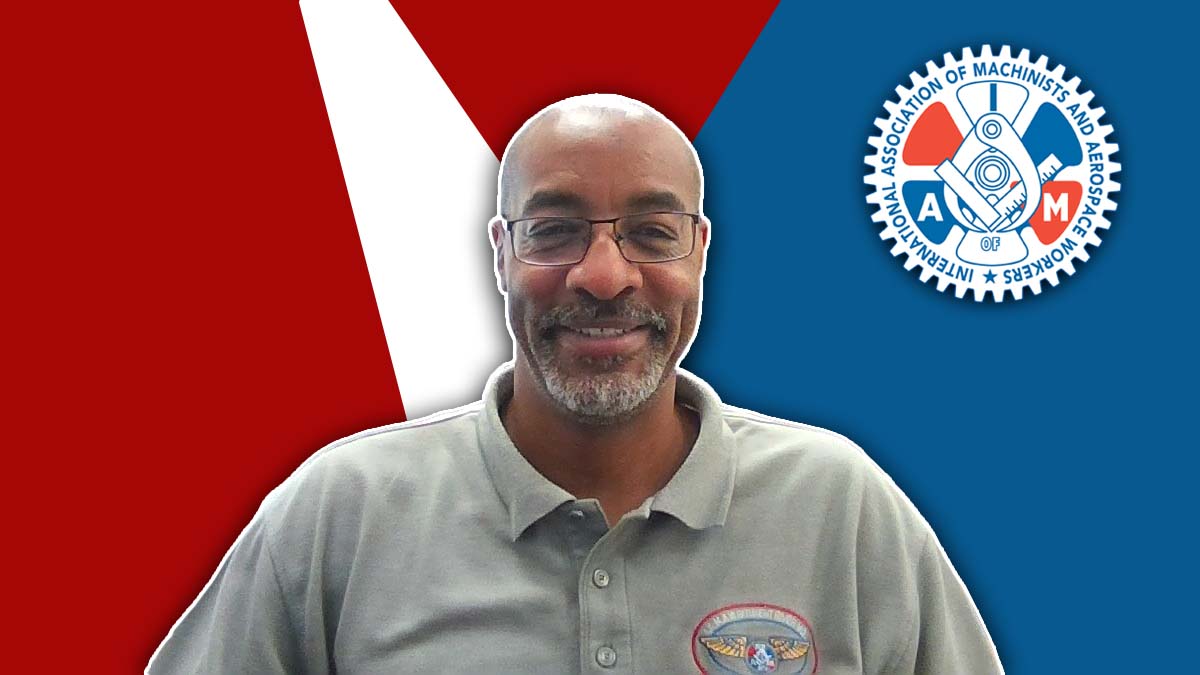 Sheldon Barber started down the union leadership path a couple of months after his shop was organized.  At the time, the current shop steward felt Barber would serve the position better than she would and asked if he would become a shop steward if she stepped down. He has always admired her for that.

“It takes a selfless person to put their ego aside and admit, without provocation, that someone else would serve the membership better,” said Barber.

Growing up in a very proud union household, Barber knew from the day his IAM Local 4 shop was organized that he was going to be involved and wouldn’t just sit on the sidelines. His father was very active in his union and served on his Local Lodge Executive Board.

In addition to his time as a shop steward, and later as Chief Steward, Barber has served on various Local Lodge committees. He became Local Lodge Vice President in 2014, and one year later was elected as Local Lodge President. He also was a District Delegate and State Council Delegate. In February 2021, Barber was appointed Business Representative for District 4 in the Eastern Territory.

Barber feels the only obstacle he had to overcome was inexperience, but time and dedication fixed that. He is humbled for all that he has learned over the years. He attributes the mentoring, support and advice of District 4 Assistant Directing Business Representative Mark Duval as being invaluable to his success.

“I want to thank Brother Barber for his words on what this month means to him, through the eyes of a Black man in our union, the IAM,” said IAM Eastern Territory General Vice President Brian Bryant. “I have watched him progress through the ranks at Local 4 up to President, and then as a Business Representative at District Lodge 4. I am proud to call him my union Brother, colleague and friend.

“While it is easy to say that Barber earned the positions he has held in our union, we would be doing a disservice to him if we fail to acknowledge that it was more difficult for him, and all of our Black Sisters and Brothers, to earn their peers’ confidence to be their union representative,” continued Bryant.

“The IAM is not unlike most AFL-CIO trade unions. While we were one of the first unions to grant full membership to our Black Brothers and Sisters, we cannot, and should not, hide our history on race in the IAM. We are a better union today because our doors were opened to all workers, and we are a better union when our Black Sisters and Brothers participate in all levels of our organization,” said Bryant.

“As we celebrate Black History Month, let’s celebrate the contributions and accomplishments that all our Black Brothers and Sisters have made in the IAM and across the entire labor movement over the history of our great union,” concluded Bryant.

Barber is inspired by and admires the self-discipline of Malcom X.

“Malcom X was a polarizing figure who went from a poor farm boy in Nebraska, to a street hustler in Boston, then to one of the most prominent and influential non-politicians of the 20th century,” said Barber.

Barber’s advice to Black members is to “jump in with both feet.”

“Don’t assume someone else will do it or let your lack of experience or knowledge stop you,” said Barber. “The main thing you need is to care about the issues facing you and your coworkers. If you care about the conditions at your job, you have enough to get started.”

His hope for the future is “true equality; not only in compensation but in recognition and input.”

Barber believes the wage inequity between Blacks and Whites in America is “criminal,” and the difference between Latin Americans and Whites is even greater.

“Without unions, the disparity would be immeasurably worse,” said Barber.