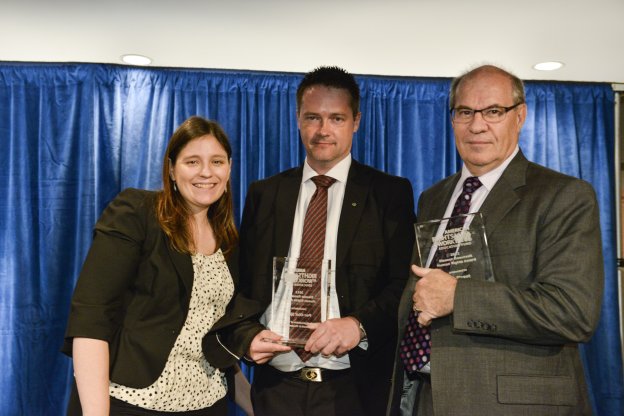 Street was presented with the Eleanor Roosevelt Human Rights Award, an award given each year to individuals who have helped champion workers’ rights and human rights.

“Eleanor Roosevelt clearly understood that human rights and union rights were indivisible and unalienable,” said Street, who thanked ARAW for their support throughout the campaign. “Her instance through Article 23 of the Universal Declaration of Human Rights and her lifelong membership as a union member in the Newspaper Guild is evidence of that. This award goes to those 318 people in Danville who took on one of the largest users in wood fiber and one of the largest retail corporations in the world.”

Per-Olof Sjöö, President of GS (center), the Swedish union of forestry, wood and graphical workers, also received the Eleanor Roosevelt Human Rights Award for his hard work and show of solidarity in supporting IKEA workers’ effort to secure a voice on the job. “The fight we had in Danville was a success for international trade union work,” said Sjöö. “International solidarity for workers’ rights will now have increased importance in our globalized economy. I hope this award will inspire trade union leaders to work even harder together in the future.”

Other honorees included DeMaurice Smith, Executive Director of the National Football League Players Association (NFLPA), for his savvy representation of the players during the 2011 NFL lockout, and for his vocal, ongoing commitment to lifting up the value of unions for workers everywhere.
Wilma Liebman, Former Chair of the National Labor Relations Board (NLRB) served as a special guest and featured speaker.