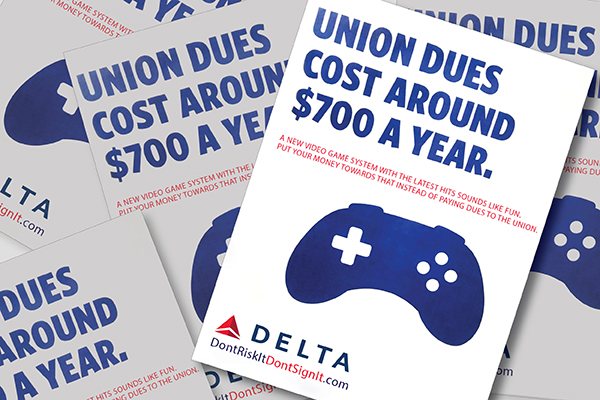 Washington D.C., May 9, 2019 — The International Association of Machinists and Aerospace Workers (IAM) today issued the following statement in response to continuing attacks from Delta Air Lines:

“Delta Air Lines’ all-out assault on their employees’ legally-protected right to unionize with the Machinists Union is confirmation that our campaign to bring the benefits of IAM-representation to more than 40,000 Delta ground workers and flight attendants is succeeding.

“It is no coincidence that Delta re-launched a campaign against their own employees less than 24 hours after the IAM initiated the international component of our campaign. Yesterday, with the assistance of the International Transport Workers Federation (ITF) and Amsterdam-based union FNV Cabine, Delta flight attendants were met in Amsterdam where they were able to sign cards supporting an IAM election outside of Delta’s intimidating view.

“Delta has resorted to defaming and spewing lies and misrepresentations about the IAM. They also continually display anti-IAM propaganda in the workplace. These are all hallmark signs of how well the IAM campaigns are doing and how scared Delta is of their employees having a voice in their careers.

“The day when Delta ramp workers and flight attendants will finally be able to bargain for the compensation, benefits and work rules they deserve is coming quickly, and that has Delta terrified.”

The IAM is the world’s largest airline union, representing more than 110,000 airline employees in North America. For more information about the IAM/Delta campaigns visit iamdelta.net and dalramp.org.