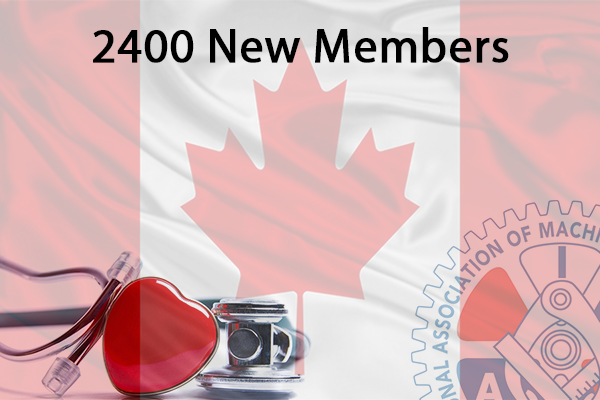 There was nothing small about this campaign. The numbers of new members – 2,400, the numbers of meetings held over a six-day period with these members – 36, the strength of the proven track record of representation for workers: it all adds up to make the IAM a major player in Ontario’s Health Care Sector.

When Spectrum Health Care announced it was merging its two divisions – Spectrum Health Care and Spectrum Patient Transfer – into one company, IAM Grand Lodge Representative Ralph Martin and IAM Grand Lodge Organizer Scott Jackson, acted quickly and quietly. “We already had a healthy relationship with Spectrum, representing their Patient Transfer ambulatory drivers, attendants and dispatch personnel,” explains Martin. “They’re what is known as a related employer and we already had a province-wide certification with part of the new company and that’s how we approached it.”

The new group, 2,000 Personal Support Workers (PSW) and 400 Registered Nurses (RN) will form their own Local Lodge – Homecare Workers Local 1231 – as part of IAM District Lodge 78. They work in multiple locations across the Greater Toronto Area (GTA) from Pickering in the east to Peel Region in the west and York Region in the north.

“This didn’t happen overnight,” explains Jackson. “Years ago we recognized we were losing members in our manufacturing base and we had to start looking outside of our ‘organizing box’ as it were. It began with Ontario Patient Transfer (OPT), and continued to grow with retirement and long-term care facilities to become the fastest growing sector in District 78.”

“You can’t do something like this in a couple of months, this goes back more than a year,” says Martin. “We worked hard to establish a good working relationship with Spectrum since they bought OPT a few years back and that has worked in our favour. Workers talk to one another and in this case, they’re in the same company and that’s a bonus. We have been busy educating the new members about the value of belonging to a union. They all want the same thing: a decent wage and pension plan, a flexible workplace as well as respect and dignity at work. The feedback from the meetings has been very positive, especially the aspect of having a pension.”

“I would have to go back more than 20 years for an organizing victory of this size and magnitude and it couldn’t come at a better time,” expressed a very pleased IAM Canadian General Vice President Stan Pickthall. “In the current environment of contract flipping and growing precarious work this is welcomed news. It shows that if you can reach people, educate them on the benefits of belonging to a union and show them they can have a better life for themselves and their families, they will gladly take advantage of the opportunity.”

“This victory for Spectrum workers is the best example yet that the IAM’s new strategic growth plan is working,” said IAM International President Bob Martinez. “Across our union, we are thinking of new ways to bring dignity and justice on the job to working families who deserve representation at work. Our power at the negotiating table is growing by the day—and that’s good news for IAM members of today and tomorrow.”

The IAM represents healthcare workers in three nursing homes in Orleans and others in North Bay, Toronto, Stratford and Bowmanville.