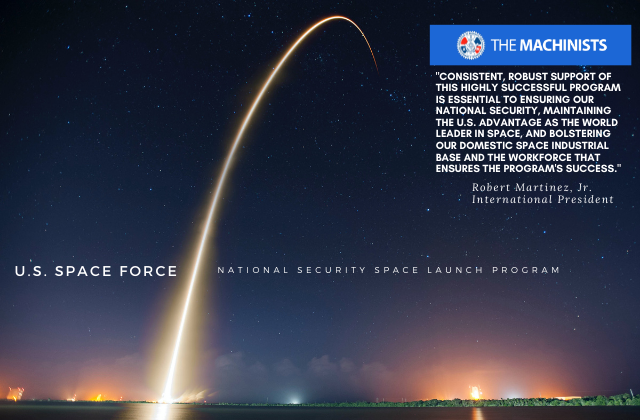 “Consistent, robust support of this highly successful program is essential to ensuring our national security, maintaining the U.S. advantage as the world leader in space, and bolstering our domestic space industrial base and the workforce that ensures the program’s success,” said IAM International President Robert Martinez Jr. in a letter supporting the effort.

The bipartisan Congressional letter outlines the need for a resilient and reliable space program, including the NSSL program, which will continue to keep the nation safe and deter aggressions from outside threats.

Machinists Union members have played a vital role in the success of the U.S. space program since its inception, with generations of IAM members working to maintain and further a space program that is second to none.

From coast to coast, the IAM represents thousands of highly-skilled workers throughout the NSSL program, from launch sites to manufacturing facilities at United Launch Alliance, Kennedy Space Center and beyond. Continued support of this program is vital to our member’s jobs, the domestic economy and U.S.national defense.