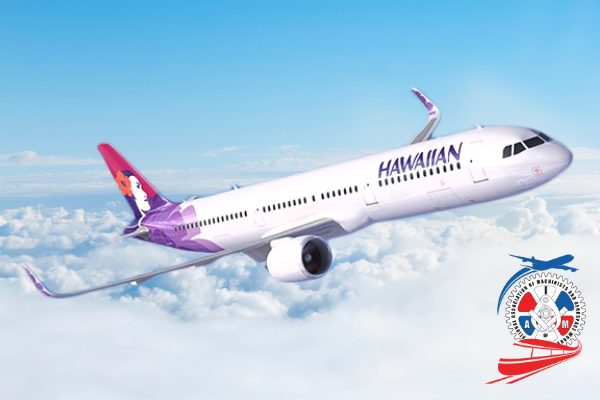 Approximately 2,500 IAM members at Hawaiian Airlines, represented by IAM Districts 141 and 142, have overwhelmingly ratified strong five-year collective bargaining agreements with the carrier. The agreements win the best job protections and largest pay raises for Clerical and Related Agents, Ramp, Aircraft and GSE Mechanics and Related in the history of Hawaiian Airlines.

“Our members at Hawaiian Airlines and across the transportation sector have kept the world moving through this pandemic,” said Richie Johnsen, IAM Chief of Staff to the International President. “They deserved a contract that gives them the respect they have earned, and I’m proud to report that this has been accomplished.”

On Wednesday, February 16, a ratification vote was held across the whole Hawaiian Airlines system.

Highlights of the agreements include:

–          An increase in the base rate of pay on date of ratification by a minimum of 10%, and increases each year over the five years of the contract by 2% each year.

–          Limits the contributions employees will pay for health care.

–          Increases the number of day trades available for members.

–          For part-time workers, the agreements will bring more fairness and expand healthcare options.

“The IAM’s strength as the largest and most powerful airline union in North America was on full display during these negotiations,” said IAM Transportation Coordinator Edison Fraser. “Our congratulations go to all IAM members, Hawaiian Airlines, the negotiating committee and support staff who made it all possible.”

“I saw firsthand the dedication and commitment of the members of our negotiating committee,” said IAM Airline Coordinator Tom Regan. “This is a model collective bargaining agreement that will benefit the entire airline industry. Congratulations to every IAM family at Hawaiian Airlines for their strength and solidarity.”