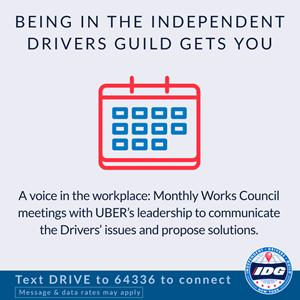 As the battle over the worker classification of ride-sharing drivers wages around the country, IAM District 15 isn’t waiting to bring justice and benefits to 35,000 New York City Uber drivers.

District 15 stepped outside the box to reach a five-year agreement establishing a new affiliated guild to represent the Uber’s New York City drivers. As highlighted in this Labor Press article, District 15 used its 20 years of experience in the Black Car industry to help form the Independent Drivers Guild (IDG).

“The guild deal gives drivers the best of both worlds,” said Jim Conigliaro, Jr., founder of the Independent Drivers Guild, an affiliate of IAMAW District 15. “They get the immediate protections they need along with discounts on key benefits and expenses, while retaining the right to unionize at any time should they be classified as employees.”

Under the terms of the agreement, drivers will participate in meetings with Uber management on a regular basis and receive discounts on key services and benefits. Uber’s New York City drivers will also now have the ability to appeal certain deactivation decisions with expert representation, in addition to the protections afforded them by Uber’s new national deactivation policy.

“For too long Uber drivers were without a voice, without a seat at the table, without protections – the guild changes all of that,” continued Conigliaro, Jr.

Since announcing the deal with Uber, District 15 has been contacted by drivers from around the country seeking similar help.