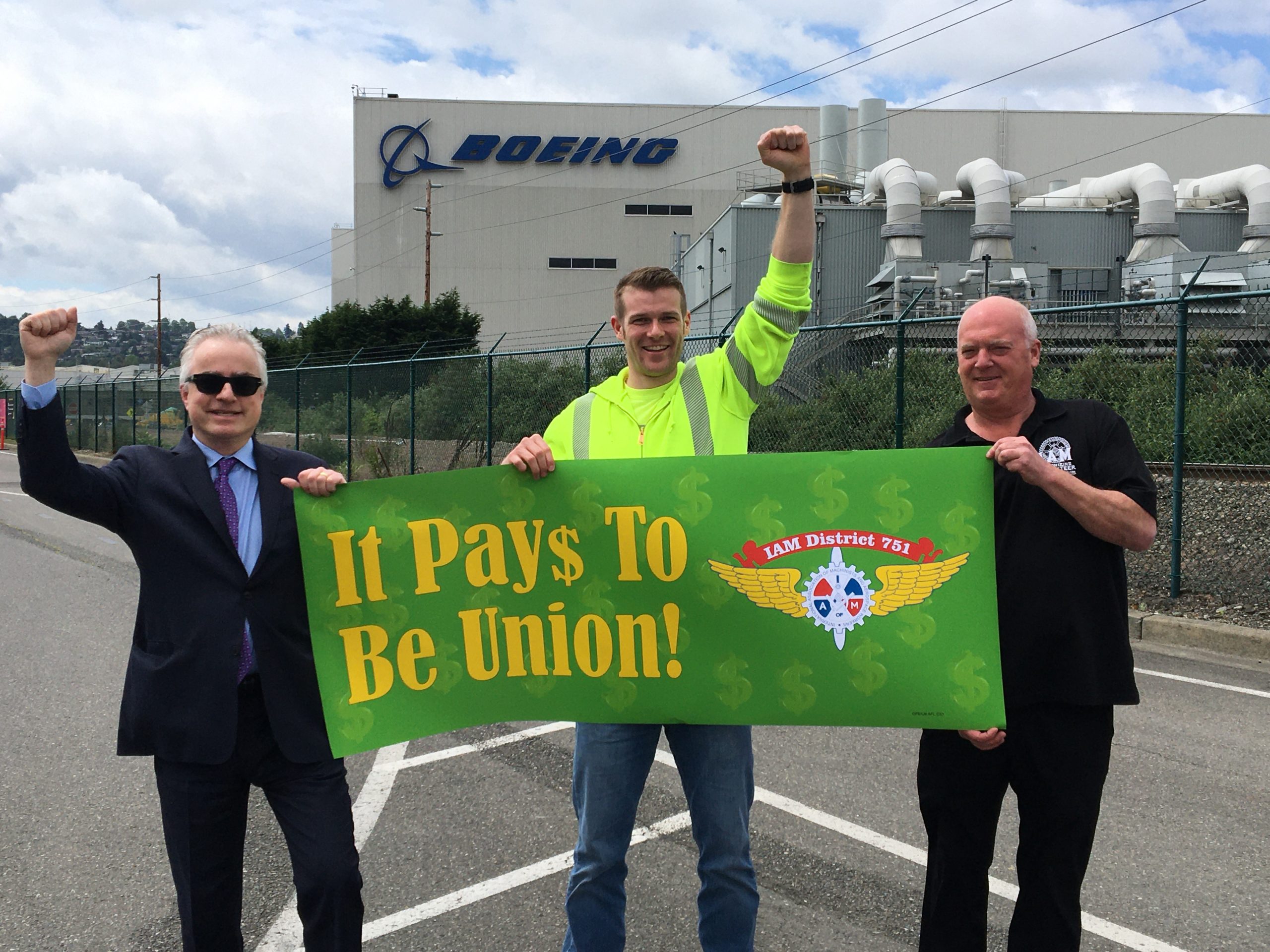 Our Union scored a victory for justice on the job, as an arbitrator recently overturned yet another unjust termination from The Boeing Company. This arbitrator’s decision had broader consequences, as there were four other members in a similar situation from the same crew that we were also challenging. The arbitrator’s decision was comprehensive and critical, which led to resolution and a satisfactory agreement for the other employees. The arbitrator concluded that the Company’s discipline was “not supported by reliable evidence.” This is further proof it pays to be union.

751-member Zach Musgrove was thrilled to be vindicated and return to his toolmaker job in Renton. The arbitrator’s decision declared Boeing did not have just cause to terminate him, ordered Boeing to rescind the termination and reinstate Zach as though he had never left the payroll – making him whole with lost wages and benefits, which amounted to more than $157,000.

Business Rep Robley Evans conducted an investigation, determined that all the discipline from the area was unjust and filed the grievances for all of them. When Boeing refused to reverse their decision, Robley elevated the grievance to arbitration.

751 Attorney Spencer Thal did an outstanding job representing Zach’s interests and presenting his case, which pointed out the inconsistencies in Boeing’s claims and highlighted Boeing’s failures to prove there was just cause for termination.

“This was an important win that is greater than myself and my crew. When I came back to work, it was a victory for all of us hourly employees,” said Zach. “This win for ‘the little guy’ doesn’t happen that often at Boeing. Our story has restored faith in the process for many members because they got to see the system work. Members realize they can challenge unjust discipline and have confidence that our Union will be there when we need them.”

“I’m very grateful to have this Union, which has our backs. In over two years, I never did anything alone. Union Steward Michael Smith was with me when I was informed I was being investigated. Business Rep Robley Evans filed the grievance. 751 Attorney Spencer Thal gave outstanding counsel and representation throughout the process. 751 Grievance Coordinator Dan Swank was meticulous in reconciling the grievance to ensure the arbitrator’s decision was followed and that I was made whole for lost wages and benefits,” said Zach. “There was an incredible amount of transparency and information sharing. This team approach shows it pays to be Union.”

Zach served as team lead on the tooling production assist (PA) team in Renton and had no previous discipline. In the arbitration, Boeing noted that Zach had been recognized as someone who goes above and beyond, always performed outstanding work for the 737 program, knows how to plan and prioritize work (including completing out of sequence work), and is smart, effective and decisive. Receiving praise from Boeing (even a couple weeks before they terminated him), made it even more baffling why he was terminated without warning and/or being given an opportunity to modify behavior Boeing suddenly found unacceptable.

Zach and his Production Assist (PA) crew’s primary work is on-demand and unscheduled, which means they must be able to respond immediately to any calls for support from the production line, which could be moving equipment, jacking airplanes, etc. At the time of his termination, Renton was building 52 737’s a month so any delay in the PA team response could be costly and impede the entire production process. Our Union compared the PA team’s role to that of mechanics on a NASCAR pit crew who must be fully prepared to respond immediately when called.

Boeing acknowledged Zach and his crew performed well on PA work, which is their primary responsibility. Boeing terminated Zach for what they alleged was misuse of Company time regarding how the crew spent their time between PA calls. Boeing contended that Zach, as team lead, should have performed and assigned others to do tooling preventative maintenance (TPM) and other tasks in between production assist jobs – even though doing so would require the crew to split up in different areas of the plant, severely compromising their ability to serve their customers, respond to immediate needs within the factory, and complete their primary work objectives.

The arbitrator concluded Boeing did not have just cause to terminate Zach. He noted that Boeing’s case was not supported by reliable evidence and was based on speculation or supposition about observed activity. Because there is a Union contract, Boeing must follow the principles of just cause which include: (1) giving notice to the grievant of the rules to be followed and consequences for non-compliance; (2) Proof that the grievant engaged in the alleged misconduct; (3) Procedural regularity in the investigation of the misconduct, and (4) reasonable and even-handed application of discipline, including progressive discipline when appropriate.

Zach is happy to be back on the job and plans to continue utilizing his union-negotiated education benefits. Since hiring into Boeing, he has used our rich contractual education benefits to earn two Associate of Arts Degrees, a Bachelor’s Degree in Business Administration from the University of Washington, and is working to complete a Bachelor’s Degree in Mechanical Engineering from Saint Martin’s University – showing his incredible drive. While waiting for his arbitration case, Zach continued his schooling and should complete his engineering degree in the next year. He encourages other members to take advantage of our education benefits and noted once they complete a degree as an IAM member be sure to submit the degree to the Learning Together Program (LTP) to receive shares of Boeing stock – this is a benefit unique to our contract that no other payrolls at Boeing currently have.

“Only by having union representation can workers have rights on the job and a voice in their wages, hours and working conditions,” said District 751 President Jon Holden. “This is a good example of why having rights on the job is important and just how valuable those rights are. Without a union, a worker is simply at their employer’s will and can be disciplined or fired for any or no reason. It truly pays to be union.”

“I want to thank the entire team at District Lodge 751 for their tireless dedication in obtaining justice on the job,” said Western Territory General Vice President Gary R. Allen. “I am heartened to hear Brother Musgrove’s testimony of regaining faith in his Union and the ripple effect of this victory. This victory is a testament to the power of solidarity; when we stand together, we win regardless of the size of the employer.”

“I hope all of my Union brothers and sisters have the freedom to work hard to realize their dreams. I hope that they have the strength to stand their ground when anybody challenges their beliefs. If any of my peers become involved in an unjust scenario like I did, I urge them to remain calm, ask for Union representation, and trust in the process. The state of our Union is strong,” said Zach.