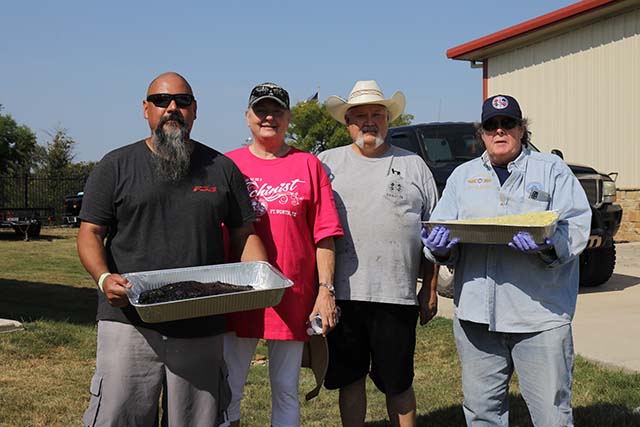 Machinist members near Fort Worth, TX have gained a global reputation for building the F-35 fighter jet, the most technologically advanced military aircraft in history. But members here are also known for BBQ grilling, a tasty talent enjoyed by union families who attended Monday’s Labor Day celebration in the suburban town of White Settlement.

“District 776 members are great Brothers and Sisters who love to cook and serve others,” says IAM Southern General Vice President Rickey Wallace. “They embody what it means to be selfless, and this Labor Day was a perfect example.”

District 776 President and Directing Business Representative Paul Black, who helped organize the event, says food, fun and labor comradery are a recipe for maintaining union strength and solidarity, especially in the South where a strong anti-union sentiment still exists.

“The labor movement gets a sense of motivation and rejuvenation when we sit down, eat some good food and enjoy each other’s company,” said Black. “It’s nice to relax with like-minded people who share the same values and virtues.”

District members whipped up 300 pounds of beef brisket, at least eight packages of hotdogs, 80 pounds of potato salad and 48 pounds of pinto beans.

“I started gathering most of the food two days before the cookout and I picked up the brisket a day before. I was up all night cooking. You’ve got to prep, then season and watch the food closely,” says Mark H. Miller, Lead griller and IAM Local 776A President. “I enjoy cooking and as a unionist I use this opportunity to spread a positive image of labor unions.”

The event, which was hosted by the Tarrant County Central Labor Council, occurred at a local waterpark and drew hundreds of people who raved about the cuisine, often coming back for second helpings.

“I enjoy the compliments and I enjoy seeing working families spending time together,” says Anthony Reyna, Griller and IAM District 776 Alternate Delegate. “It’s a hobby that I’ve been doing for about 10 years now. I consider it a weekend hobby.”

District 776, which is the home lodge of IAM International President Robert Martinez Jr., has a history of using BBQ grilling as a way to build relationships with the local community. In recent years the district cooked for Machinists members on strike in Oklahoma, United Auto Workers on the picket line in Texas, IAM Aerospace Conference, and functions for Guide Dogs of America and Tender Loving Canines.

“It’s always exciting. It’s always good to have working people coming out to enjoy the day,” says Anna Ritchey, the first woman to become vice president of IAM District 776. “We want people to know the IAM is there for them. We try to make things better for people.”

Before the pandemic, District 776 routinely served-up almost 1,000 pounds of meat annually at various cookouts. Now that COVID-19 safeguards are in place, the district plans to increase cooking for the community.

“The IAM always wants to be a front runner. You know that,” says Keith “Chub” McCrory, IAM District 776 Lead Organizer. “We want to put our name out there and let people know we are the Fighting Machinists. We want to help people.”