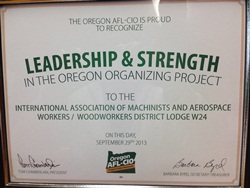 IAM District Lodge W24 was recognized for leadership and strength in the Oregon Organizing Project at the 53rd Oregon AFL-CIO Convention held in Bend, OR on September 29, 2013.

The Oregon Organizing Project was started by Oregon AFL-CIO President Tom Chamberlain. The project develops and maintains a network of labor unions and constituency groups in the state of Oregon that can be utilized for purposes of organizing the unorganized.

“District W24 has a very close working relationship with the Oregon AFL-CIO,” said IAM District W24 President and Directing Business Representative Chip Elliott. “It’s a great pleasure for the District to receive such an honor for our hard work toward the many organizing efforts we have been involved in over the years.”

“Congratulations to all of the members and staff of District W24,” said IAM Western Territory General Vice President Gary Allen. “Growth projects like this are the first steps toward building a stronger labor movement for the working people of America, and with the Fighting Machinists leading the way, I look forward to the many years of organizing victories that are ahead for working families of Oregon.”