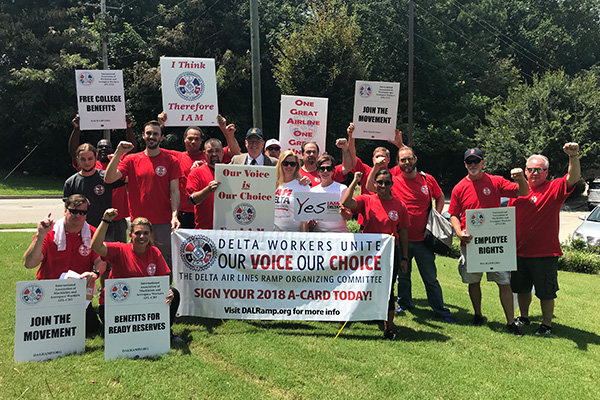 The IAM filed election interference charges against Delta Air Lines this week with the National Mediation Board (NMB), while numerous politicians publicly supported the Flight Attendant and Fleet Service campaigns.

The IAM has overwhelming evidence that Delta Air Lines has interfered with the Flight Attendants and Ramp employees’ lawful right to seek a vote for union representation free from interference, influence or coercion exercised by the carrier.

Some examples of Delta’s illegal activity include a coordinated misinformation campaign through postings and electronic messages in the workplace, surveilling and photographing employees participating in union activities and the singling out and termination of union activists.

“The IAM has provided the NMB with evidence showing Delta has run an unlawful, systematic anti-union campaign that includes intimidation, discipline and terminations of union activists,” said IAM Transportation General Vice President Sito Pantoja. “Last week, the public was able to see what many behind the walls of Delta have always known; that Delta will go to great lengths to suppress their employees’ collective voices.”

“It is has become clear that Delta management has a highly coordinated and strategic plan to suppress the efforts of over 40,000 workers from voting to join the IAM,” reads the letter. “The time has come for Delta to respect all of its workers fundamental right to freedom of association and stop bombarding employees with anti-union propaganda.”

“Delta’s Don’t Risk It. Don’t Sign It campaign is disingenuous, disrespectful, and misleading,” reads the letter. “It is an attempt to interfere with its employees’ legal rights and hinder the ability of thousands of workers to make an important decision about their lives and livelihoods. I urge you to cease this campaign and allow Delta employees the ability to determine whether to unionize free from interference, intimidation, or retaliation”

.@Delta workers at #MSP and across the country are grateful for the support of @SenTinaSmith as they fight for voice amidst Delta’s scare tactics. #GameOverDelta pic.twitter.com/zqlGgmoAl2

“I applaud the Senators for shining a light on some of the anti-union tactics being used by Delta,” said IAM International President Robert Martinez Jr. “Delta is trying to crush the will of thousands of flight attendants and fleet service workers. Delta workers deserve a contract that provides adequate workplace protections, consistency in the workplace, higher wages and better benefits. The IAM represents more than 110,000 airline employees in North America so we understand the power of speaking with one collective voice in the airline industry. I urge Delta to suspend all anti-union tactics and give their employees the freedom to choose what is best for their families.”

“The IAM is fully committed to organizing Delta flight attendants and fleet service workers,” said IAM Transporation General Vice President Sito Pantoja. “I want to personally thank the Senators for their support and courage to sign on to this letter. This campaign gives Delta employees the opportunity to be represented by a strong union and be protected by an industry-leading contract. We also call on Delta to discontinue the anti-union tactics and let the flight attendants and fleet service workers have the freedom to make life better for their families.”