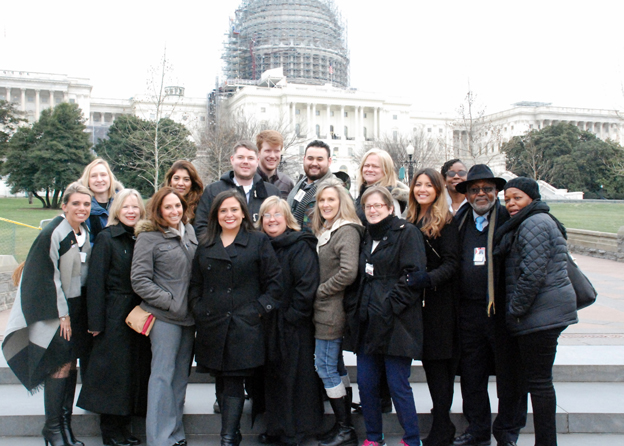 IAM Flight Attendants stand on the steps of the Capitol after lobbying Congress for a 10-hour rest period.

IAM Flight Attendants from across the country came to Capitol Hill urging Congress to pass a bill securing them 10 hours rest after a full “duty day,” which can last as long as 16 hours. Their lobbying effort is a part of the IAM Flight Attendant Conference held at the William W. Winpisinger Center this week.

More than 20 IAM members from United ExpressJet and CommutAir, some for the very first time, lobbied 24 members of Congress. The majority of the flight attendants work regional flights, meaning they are the only ones performing the aircraft safety equipment checks, which are required before each flight.

Even after working 13-to-16-hour duty days, the current FAA rest minimum for flight attendants is only nine hours, which can be reduced to eight hours. “Rest periods” include the actual boarding process, deplaning passengers, exiting the airport, travel to and from the hotel, and passenger boarding up to an hour before the first flight of the next day. It often equates to an actual rest time of less than six hours, even in the best of circumstances. More often, this relates to four hours of sleep or less after factoring in meals, showers and prep time.

IAM Local 2339-O member Zach Hart spoke of an instance when his overnight stay was changed due to storms and delays. It took until 6 a.m. for scheduling to find him a room in Chicago, which ended up being an hour-and-a-half drive.

“After I got to the hotel room, scheduling wanted to give me an eight hour rest period, and that was after a 19 hour duty day,” said Hart. “That eight hours included the three hour round trip drive to the hotel. I would have gotten about two hours of sleep that night.”

Long days and lack of rest results in both mental and physical fatigue, which is a big factor of how they can perform on the job. Without proper rest, Flight Attendants can be slower to react to emergency situations. They are responsible for the evacuation of all passengers aboard the aircraft, and are the first responders to any medical emergencies.

Attending the conference and lobbying on Capitol Hill gave the group a chance to spend some much needed time together, something that doesn’t happen very often due to the nature of their careers.

“I get a great feeling of unity and strength when I see all of us together at the conference, and more importantly on Capitol Hill in our fight for 10,” said Cori Horowitz, a Chicago-based ExpressJet Flight Attendant and president of IAM Local 2339-O. “It’s amazing to hear the responses from people after they’ve been here and lobbied for the first time in their life. They get inspired to do more for their union. That inspires me.”