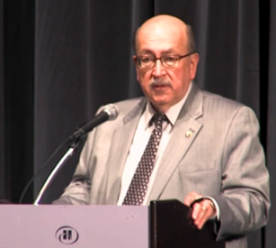 Following the unanimous endorsement of Hillary Clinton for president by more than 600 union leaders at the 2015 National Staff Conference in New York, IAM International President Tom Buffenbarger addressed the conference to highlight the differences between the two top candidates running in the Democratic primary and why former Senator Clinton is the best choice.

Click here to watch the video of President Buffenbarger’s remarks.

“I don’t say bad things about the candidates. I look for the positive things to say about them, but the other candidate in the race and why we chose to go the way we did, that candidate made it obvious,” said Buffenbarger. “We’re all affected by his votes on several key issues. I’m just going to run down the list of a few and the list is long.

“He voted no on F-22, no on F-35, no on P-8, no on F-16s, no on F-18s, no on F-15s, no on C-130Js, no on C-5s and no on C-17s. He’s one of the few Democrats who opposed us on the Ex-Im Bank. And actually is very vocal against it. We need that bank for the work our members represented in this room do every day. It helps our companies sell the products made in the U.S. to foreign buyers. It underwrites the loans they take to buy the airplanes, jet engines, tractors, road grading equipment and any kind of machinery still left that we make in this country. Ex-Im helps [customers] buy our products and keeps us competitive.

“And now in the infinite wisdom of our Congress, they killed the bank. That’s an assault on us and Bernie Sanders was a part of the assault on us. And we tried to tell him that,” said Buffenbarger. “We don’t look at it as helping a company or CEO, we look at it as providing jobs for our members. That’s our job. We’ll never shy away from finding those things or ways to help keep jobs for our members.

“He’s opposed us on all of the issues that affect our forestry workers, our federal workers, their wages and health care benefits. He has voted with the Republicans to freeze them or make them pay more for different things. We have a lot of members in this union who work for the government. And they deserve respect and dignity, as well. And they’re beat up on all the time, by politicians, sadly to say, from both parties.

“On every one of these things I just mentioned, Senator Clinton’s been an ally.”