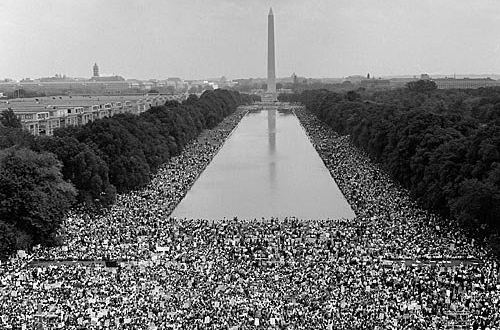 The October 2, 2010 One Nation Working Together Rally follows in the tradition of the 1963 March on Washington for Jobs and Freedom (above), which remains unchallenged as the most important civil rights gathering in U.S. history. Click to enlarge)

The Machinists Union and a host of AFL-CIO unions are joining together as organizational sponsors of One Nation Working Together, a nationwide effort to get America back to work.

One Nation is a coalition of major civil rights, religious, labor and environmental organizations who are planning the largest jobs rally in Washington, DC in decades and local events held in communities all across the country. It all happens on Saturday, October 2, 2010 (10.2.10).

“I am asking all IAM Locals, Districts and Territories to participate in the 10.2.10 March, or in a local event on the same day,” said IAM International President Tom Buffenbarger in a letter announcing the IAM’s support of the 10.2.10 effort.

“With your support and the support of dozens of fellow unions in the AFL-CIO, community groups and American citizens who are fed up with the gridlock on getting the economy moving, the 10.2.10 march is an opportunity to mobilize an army of tens of thousands of Americans who are ready to demand action to create jobs, protect America’s middle class, make the American Dream possible for all working families and demand the change we voted for.”

Click here for information about the March, how to volunteer and a sign-up sheet to register your participation. Check back often for updated information.