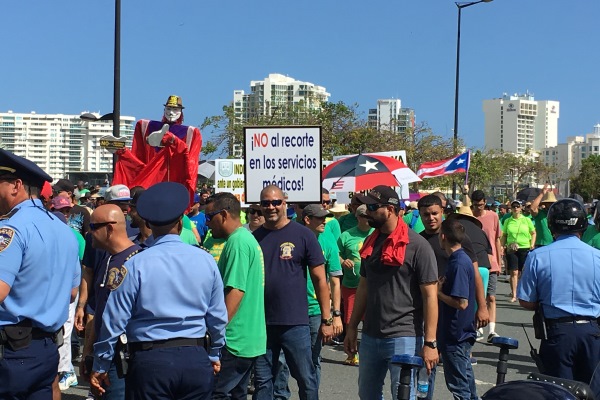 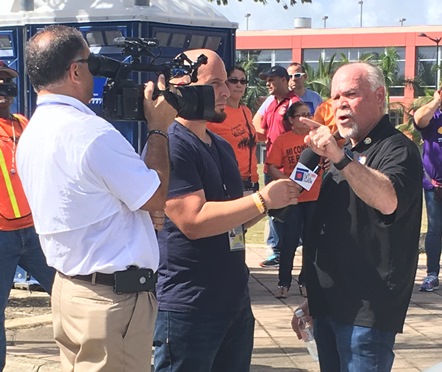 IAM Local 2725 Business Rep. Jose Rodriguez Baez, pictured being interviewed by a Puerto Rican news crew, was among the several thousand union members who marched in protest to express their opposition to recent government-led measures to reform labor laws.

A vocal group of more than 5,000 union members marched through parts of San Juan, PR to protest outside a meeting of the Puerto Rico Industrialists Association (AIPR).

Protest participants included IAM members, and members of more than a dozen other unions. Workers marched to express their opposition to recent government-led measures to reform labor laws, as well as the intervention by the federal government to control the public finances of Puerto Rico.

“Union members need to have their voices heard – both inside the workplace and on the streets when it’s needed,” said IAM Southern Territory General Vice President Mark Blondin. “IAM members know the power of standing in solidarity when it comes to stopping those who want to take away from workers.”

Inside the closed AIPR meeting, Puerto Rico Gov. Ricardo Rosselló Nevares gave a presentation on the measures being taken to confront the island’s economic crisis. One action involves reductions in coverage on the employees’ “health card,” the government health insurance plan.

On a portable stage located 200 yards from the hotel where AIPR met, union leaders attacked the government’s attempt to pay off the Puerto Rico’s estimated $70 billion debt on the backs of island workers while giving massive tax cuts to businesses. Protestors wanted their voices to be heard that they are opposed to workers suffering the cost of fixing the debt caused by poor government administration. Thanks to a large presence of press and television reporters at the protest, workers voices were heard.

“In Puerto Rico, the government, big business, and the Fiscal Control Board, appointed by Congress, are conspiring to approve laws that eliminate labor rights, with especially strong negative effects for young workers, retirees, and other less protected sectors,” said Rodriguez-Baez. “Workers and their unions are united in the struggle to defend these rights and combat the government austerity program which is impoverishing our people in order to pay the debt owed to bondholders.”