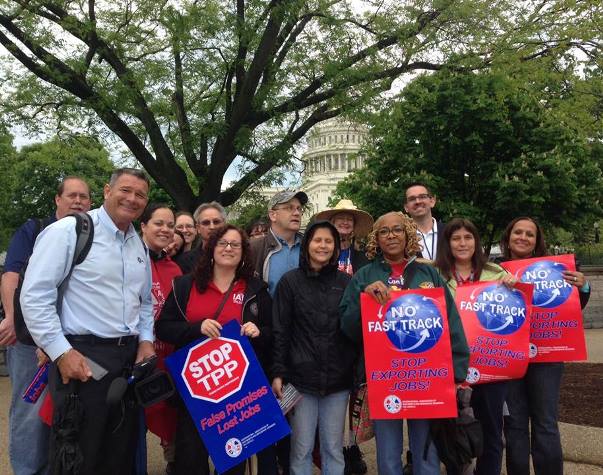 A springtime downpour in Washington, DC didn’t dampen the spirits of IAM members and other activists from rallying against the Trans-Pacific Partnership (TPP), another free trade deal that promises job growth but instead exports thousands of U.S. jobs to low-wage countries.

“The people being soaked are the American public,” Rep. Sandy Levin (D-MI) told the crowd gathered near the Capitol.

TPP includes the United States and 11 other countries, including infamous workers’ rights violators like Vietnam and Brunei. It is being discussed in secret, with no oversight by the public, Congress or the media.

To make matters worse, trade negotiators are seeking to “fast track” TPP, meaning Congress would only be able to vote yes or no on the full agreement. Lawmakers would not be able to amend any flaws in the bill.

“American workers are being squeezed, their jobs are being offshored, their paychecks are being diminished and their benefits have been cut,” said DeLauro. “Now we have the TPP, a deal that threatens to further accelerate the job losses and economic insecurity that Americans are already facing.”

Click here to tell Congress we want fair trade, not free trade, in the TPP.