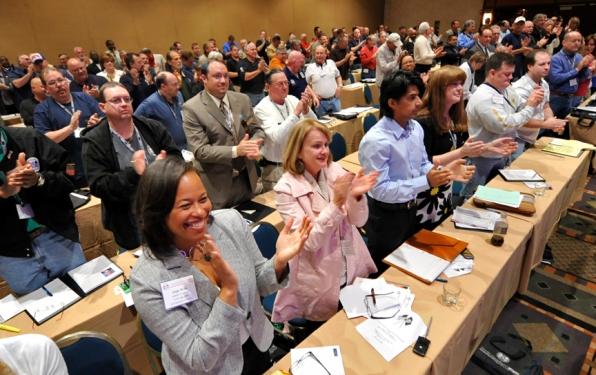 The annual IAM Legislative Conference brings hundreds of the union’s most experienced political activists to Washington, D.C. for a week of face-to-face contact with lawmakers who are left without any doubt about where the IAM stands on key issues.

“Jobs is the Number One issue in America today. You know it and I know it,” said IAM President Tom Buffenbarger who urged delegates to ask their representatives what they’re doing about the jobs crisis in America today. “If they can’t answer or won’t answer, don’t vote for them and go find someone who can answer that question.”

Delegates at the conference roared their approval when the International President announced that the NMB had just announced the long-awaited updating of election rules governing airline and rail workers. “For the first time in 75 years, transportation workers are going to have a vote like everyone else,” said Buffenbarger. “This is what happens when a government understands that people have rights, too.”

In addition to announcing the NMB rule and briefing delegates on the potential impact on elections at Northwest-Delta, Buffenbarger reviewed the status of the competition to build a new fleet of aerial refueling tankers, as well as the growing effort to turn back the president’s plan to cut funding for the nation’s manned space program.

Closing out the opening day of the conference was a spirited address by AFL-CIO President Rich Trumka, who thanked the delegates for their leadership on the JOBS Now! campaign and echoed the call for accountability from elected officials who seek labor’s support. Speaking of the effort to reform runaway practices on Wall Street, Trumka declared, “No one gets to say ‘no’ to reform and then expect us to say ‘yes’ in November.”