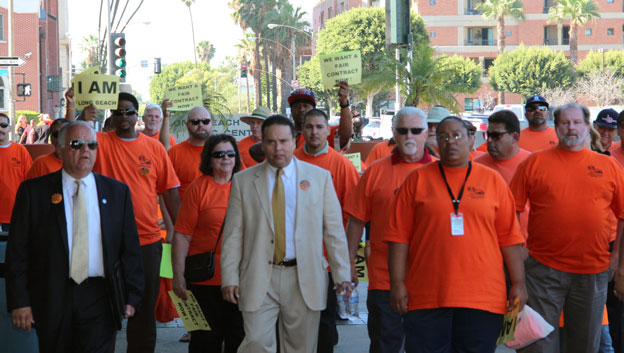 Long Beach City employees staged a rally and a march to City Hall to demand a fair contract from the City of Long Beach, CA. The IAM employees have been in contract negotiations since October of last year.

“A great number of the members we represent, who work full-time, earn less than a part-time city council member who works one day a week,” said Richard Suarez, IAM Special Representative and Chief Negotiator. “All we are looking for is a little fairness and equality in a city that boasts itself as being a progressive and labor friendly community.”

The IAM also represents the highest number of city employees with no healthcare protection, no retirement or other quality of life benefits.

“It is without a doubt that these hard working brothers and sisters, who add value to this city, are being punished for being paid what they were owed for the city’s illegal furlough program in 2009,” said IAM Western Territory General Vice President Gary Allen in reference to a recent IAM victory that resulted in the city employees receiving a settlement of more than $4 million. “Our members are not going to be held responsible for, and are not going to finance, poor management decisions.”

Contract negotiations between the City and the IAM opened last fall after the contract expired due to the city’s lack of preparation. Members of the Union are calling on elected officials in Long Beach to focus on issues important to the hard working men and women who make the city run.