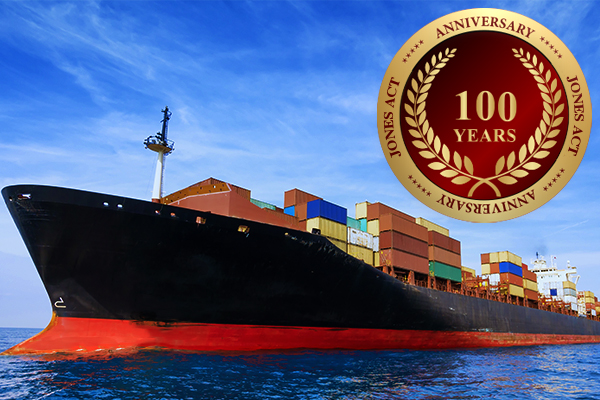 June 5, 2020 marked one hundred years since the enactment of the Merchant Marine Act of 1920, known as the Jones Act, which ensures the United States is able to maintain a domestic maritime fleet to protect our maritime industry and national defense.

To this day, by requiring that all vessels carrying goods between two U.S. ports be American built, crewed and flagged, the Act helps to provide industry stability and sustain American jobs.

As part of the AFL-CIO Transportation Trades Department, the IAM is key to the merchant marine and marine defense industries. Throughout the last century, IAM members from coast to coast have helped build and sustain a healthy domestic fleet.

Rarely has any piece of legislation stood for so long and remained so important to the domestic sectors and workers it supports. Today, our nation’s waterways are navigated by 40,000 Jones Act compliant vessels built in this country. The construction, maintenance and upgrading of these vessels is responsible for keeping the lights on at dozens of shipyards and factories, supporting well over 100,000 jobs.

However, the shipbuilding industry is constantly threatened by unfair foreign competition. Many of these shipbuilders seeking access to the U.S market are highly subsidized by foreign states, and none are subject to the domestic content, environmental and labor requirements placed on U.S. companies. By mandating that U.S. made ships sail between U.S. ports and harbors, the Jones Act continues to guarantee we will have the ability and workforce needed to build vessels in this country.

Learn more about the importance of the Jones Act.