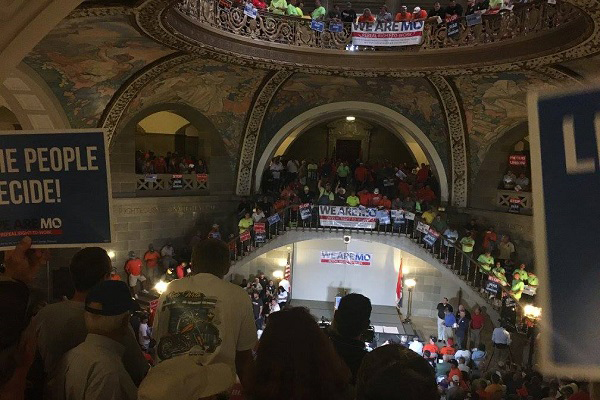 IAM members joined thousands of advocates rallying at the Missouri Capitol before delivering over 300,000 registered voter signatures to the Missouri Secretary of State’s office. The signatures were more than three times the amount needed to block so- called right to work law’s Aug. 28 implementation and hold a statewide referendum vote in November 2018.

IAM members were part of a coalition of dedicated volunteers who gathered the signatures.

The rally and signature delivery come after the anti-union law, targeting working families, was approved in February.

It’s official! 310,567 delivered to the Secretary of State to let the people vote. Together we win! #RepealRTW pic.twitter.com/89DksTHdXw

Missouri is making history. This is a game-changing rebuke of a rigged economy. #RepealRTW #1u pic.twitter.com/JKxLbaFS6X

“The fight has only just begun,” said Philip Gruber of the Machinists’ Midwest. #1u

IAM represents more than 12,000 Missourians in the automotive industry and at Boeing, GKN, ATK, Harley-Davidson, and Honeywell.