IAM Members at Triumph Overwhelmingly Vote to Strike in Spokane 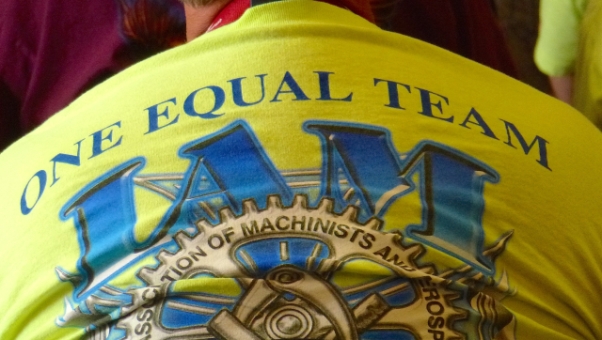 In a strong show of union solidarity, more than 400 IAM District 751 Local 86 members employed at Triumph Composite Systems in Spokane, WA will begin walking the picket lines at 12:01 a.m. on Wednesday May 11.

Union members had two over-riding goals in this year’s talks: Restoring pension benefits to all workers and eliminating a two-tier wage scheme that pays workers hired since 2006 as much as 12.5 percent less for performing the same work. Both were lost in 2013, when the company demanded those concessions, after Triumph workers decided by a six-vote margin not to strike.

This time, Triumph managers “made very little movement to address these top issues,” said IAM District 751 President Jon Holden, who has led the union’s negotiating team. “The company over-reached three years ago, and our members have not forgotten it.”

“Our members at Triumph have the full support of the IAM in this fight,” said IAM International President Bob Martinez. “Booming aerospace companies like Triumph cannot continue reaping huge profits without appropriately compensating the employees who do the work. We are proud of the dedication and solidarity of these fighting Machinists.”

Under the rejected proposal, the company offered cost-of-living adjustments but no wage increases during the contract. Workers hired since 2006, who are currently paid 12.5 percent less than longer term employees, would see a raise of 2 percent this year, no raise in 2017 and a 1.5 percent raise in 2018.

Triumph did not offer to restore the pension to workers hired since 2013, and instead is proposing to cut the 401(k) match to those workers, thus reducing their retirement security. The company’s failure to address these long-simmering issues was a major factor prompting the union negotiators to call for a strike.

Other issues, including plans to impose unlimited increases in health care premiums, a refusal to disclose the amount of taxpayer dollars it receives under the state’s $8.7 billion aerospace industry tax incentive and its intimidating and coercive tactics on the shop floor added to the impasse.

“This company has taken tax credits from the people of Washington but has still moved work to Mexico,” said IAM Western Territory General Vice President Gary Allen. “It is an abuse of the intent of the incentives by this company and other aerospace giants.”

“We don’t think it’s fair for Triumph to expect the Spokane community to support their company with tax dollars, and then to take away some residents’ jobs while cutting overall pay and benefits for those who are still working,” said Holden.

The Triumph workers are specialists in fabricating composite components for aircraft interiors, including floor panels and ducts for environmental control systems. They produce more than 10,000 environmental control system, flight deck and composite interiors assemblies and 9,000 floor panel assemblies each month, which are used in airliners built by Boeing, Airbus and Bombardier.

Workers will continue on the job until the end of Tuesday, May 10 and around-the-clock picketing will begin just after midnight Wednesday, May 11.