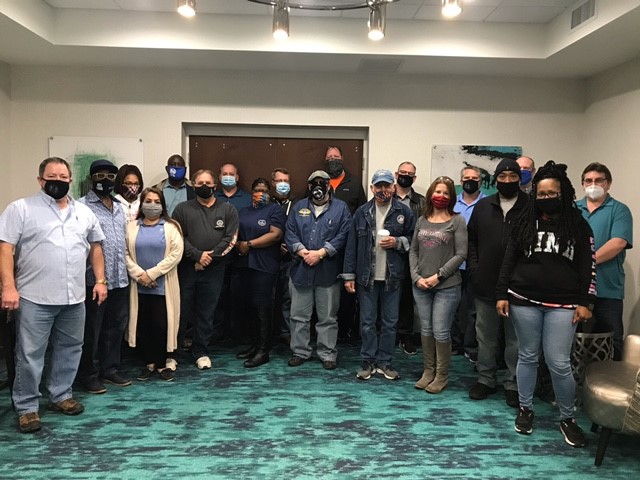 IAM members from the Southern Territory, Transportation Department, Grand Lodge and the Georgia AFL-CIO have mobilized over the past month to get IAM members out to vote for worker-friendly candidates in today’s Georgia U.S. Senate runoffs. The outcome of these runoffs will determine the balance of power in the Senate.

“I would like to thank GVPs Wallace and Pantoja and all IAM members who have been proactive in getting out the vote in Georgia for this critically important Senate race,” said IAM International President Robert Martinez Jr. “The Machinists have been at the forefront of labor’s push to help get worker-friendly candidates Jon Ossoff and Rev. Raphael Warnock elected.”

“I have personally been in Georgia over the holiday working with these dedicated Brothers and Sisters to take back the U.S. Senate for working people,” said IAM Southern Territory General Vice President Rickey Wallace. “Together we have contacted thousands of members with door hangers and phone calls. We have been mobilized for months in Atlanta, Savannah, Augusta, Albany, Macon and across the state. I want to thank the Legislative and Political Department, my entire staff, especially Grand Lodge Representative Tim Wright, our field liaisons and directors, as well as the leadership and members of Local 709, and Districts 75, 776, 131, 112, 1888 and W2021 for putting in so much effort throughout these campaigns. This has been a true team effort at every level of our union.”

“I want to thank the members from Local Lodge 2665 in Atlanta who mobilized to help ensure IAM voices are heard, and the volunteers from all three Transportation District Lodges across the country who made phone calls to IAM members in Georgia because the outcome there will be felt nationwide,” said IAM Transportation General Vice President Sito Pantoja.

The Georgia State Council of Machinists has endorsed Jon Ossoff and Rev. Raphael Warnock in part because they will be allies in Washington in passing the PRO Act, pension reform and COVID relief that working families desperately need.

For more on the Senate race in Georgia, visit iam2020.org/georgia.

Please click here to watch IAM members in Georgia and from across the country voluntarily campaigning for two pro-labor candidates in Georgia.

Today is the day, Georgia!

IAM members have been mobilized for months getting out the vote out for labor endorsed candidates @ReverendWarnock and Jon @Ossoff.