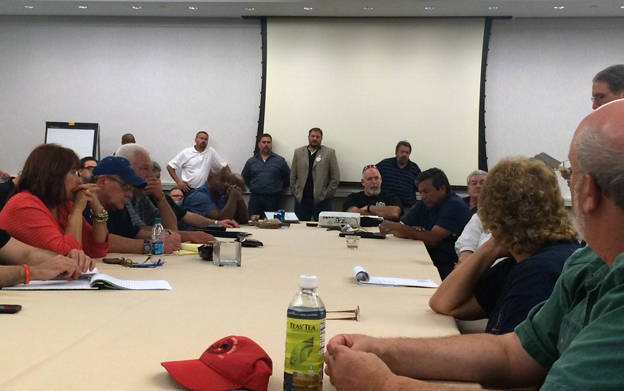 Members of the Coordinated Bargaining Committee, a coalition of 11 unions at GE, discuss the new collective bargaining agreement with the company.

Workers at General Electric have ratified a new four year collective bargaining agreement that includes more than 1,400 IAM members at several locations throughout the country.

With the new contract, the defined benefit pension was updated and improved, medical deductibles and co-insurance will not increase for the life of the agreement and the union held the line on healthcare contributions in the first year of the deal. The new agreement also includes dental and vision improvements, wage improvements and fixed cents per hour cost-of-living adjustments.

“The Local leadership did a great job representing their members in these negotiations. They stood strong on the issues that were important to them based on the survey data compiled prior to negotiations,” said IAM Headquarters General Vice President Bob Martinez, Jr. “They made their voices heard at the bargaining table when it counted and secured a solid agreement for the members and their future with this company.”

Martinez led the negotiating team and was assisted by leaders from the locations represented by the IAM and several departments at IAM Headquarters.

“Local leadership played a vital role in this negotiation,” added IAM Director of Collective Bargaining Tom O’Heron. “There were changes to the process that gave local leaders an opportunity to play a more active role than in the past and they took full advantage of that opportunity to speak on behalf of their membership.”