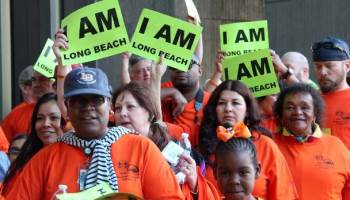 IAM Local 1930 members who work for the city of Long Beach, CA finally have a contract after two years of city stall tactics and attempts to bust its largest union.

The three-year deal includes a 6 percent pay raise over three years for approximately 2,700 city librarians, janitors and other service employees. The contract also mandates pay raises for IAM-represented workers if other city bargaining units, other than police or firefighters, get higher wage increases over the next three years.

“If the city of Long Beach seeks to maintain its reputation of being a thriving community, it must first take care of the women and men who are tasked with building the community,” IAM Grand Lodge Representative Richard Suarez told the Long Beach Press-Telegram. “This contract is a step in the right direction, but there is still work to be done to strengthen the relationship between city management, city employees and the IAM.”

The agreement was reached only after 18 trips to the bargaining table and the use of a state mediator.

“Our members perform, with distinction, the work of making the City of Long Beach a thriving community,” said IAM Western Territory General Vice President Gary Allen. “The IAM is in the beginning stages of building a stable working relationship with the City, but it will take more than one decent contract to rebuild what the City of Long Beach was determined to dismantle. My hat goes off to our members for standing in unity and demanding a fair contract for their effort.”