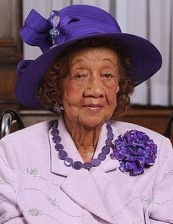 Civil rights activist and longtime president of the National Council of Negro Women Dorothy Height died this morning. She was 98.

Height was president of the National Council of Negro Women for more than 40 years. Known as the “founding matriarch” of the Civil Rights Movement, Height was the leading female voice amongst a cast of civil rights activists which included Dr. Martin Luther King Jr., Roy Wilkins, A. Philip Randolph, Whitney Young, James Farmer, Bayard Rustin and John Lewis during the 1950s and 60s. She marched in Harlem during the 1930s. She lobbied first lady Eleanor Roosevelt and President Dwight D. Eisenhower on behalf of civil inequality and school desegregation in the 1940s and 50s. In 1963, Height stood alongside Dr. Martin Luther King, Jr., during his famous “I Have a Dream” speech during the March on Washington.

In 1994, Bill Clinton awarded her the Presidential Medal of Freedom, the nation’s highest civilian honor.