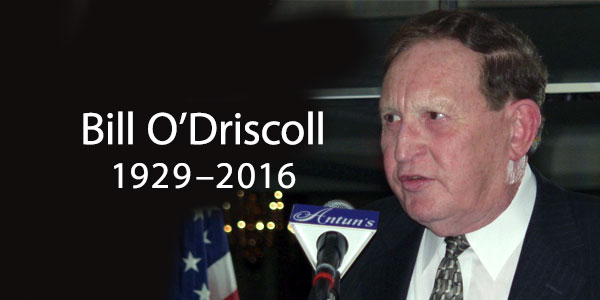 William O’Driscoll, the former head of IAM District 142 and an airline industry expert who guided thousands of IAM members through airline bankruptcies, tough negotiations and 9/11, passed away on July 8, 2016.

“Bill was one of strongest and smartest leaders in the entire labor movement,” said General Vice President Sito Pantoja. “Tens of thousands of workers, retirees and their families are enjoying the benefits of his work and dedication every single day. Future generations of airline workers will feel the mark he made on the industry. He has left a legacy that will not be forgotten, and will always be remembered as the type of union representative we should all aspire to be.”

O’Driscoll was born in County Cork, Ireland and educated at the Catholic Worker’s College in Dublin before immigrating to the United States, where he graduated from Cornell University.

He began his Machinists Union career when he was elected Shop Steward in 1959 for Trans World Airlines (TWA) Local 1056 members in New York. He served on the Local 1056 Grievance Committee and as Trustee and President.

O’Driscoll was the Chairman of the New York Strike Committee during the Great Airline Strike of 1966. Perhaps not coincidentally, O’Driscoll, or “OD,” as he was better known, passed away on the 50th anniversary of that watershed moment in airline and labor history.

As District 142 head, O’Driscoll oversaw a diverse portfolio of 57 collective bargaining agreements covering more than 36,000 IAM members, while serving on the TWA Board of Directors. He led IAM members through three TWA bankruptcies in the 1990s. O’Driscoll freely shared his bankruptcy experience to help prepare other IAM leaders deal with the revolving door of bankruptcies that plagued the industry in the years following 9/11.

“Bill O’Driscoll is a big reason why IAM members in every post 9/11 airline restructuring fared far better than any other work group at a given carrier,” said IAM International President Bob Martinez. “His accomplishments are proof of what a good man and a strong union can accomplish together.”

O’Driscoll expanded the IAM’s airline membership by bringing Continental Airlines Flight Attendants into District 142. He negotiated innovative contract terms that changed the industry and have been adopted at other airlines, including making sure Flight Attendants had FMLA protection a decade before they were actually covered by the law.

O’Driscoll aggressively fought the attempts by anti-union activists to divide his membership. His commitment to leveraging the strength of all IAM members, in all classifications, was absolute.

“When TWA contracts for Mechanic & Related and Customer Service employees were settled and included the IAM National Pension Plan, but TWA executives declined to agree to pensions for Flight Attendants, Bill refused to vote the ground personnel agreements,” said GVP Pantoja. “Instead, he prepared the entire membership to strike to support TWA Flight Attendants, a move that guaranteed the Flight Attendants achieved pensions when the airline cowered.”

“Bill shied away from the spotlight, preferring to orchestrate circumstances from afar so his members benefitted,” said Martinez. “The sacrifice he and his family made for this union and its members is greatly appreciated and will never be forgotten.”

“If the word ‘legend’ applies to anyone, it is Bill O’Driscoll,” said Pantoja.