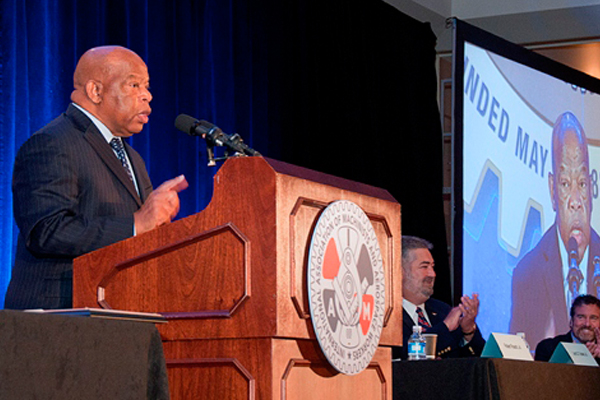 The IAM is mourning the recent passing of legendary civil rights leader and U.S. Rep. John Lewis, who served his Georgia congressional district for more than 30 years. Lewis, who passed away on Friday, July 17 at the age of 80, was a long-time ally of Machinists Union members in Congress.

Lewis, the son of sharecroppers who preached non-violence in the face of oppression, in 2013 personally participated in the IAM’s 125th birthday commemoration in Atlanta. Speaking to IAM members there, Lewis encouraged them to fight against voter suppression.

“We must not step backward to another dark period in our history,” said Lewis. “The vote is the most powerful nonviolent tool we have in a democratic society.”

I’ve known @RepJohnLewis for a long time. He’s always been a fighter and a catalyst for good. He’ll forever be a friend of the @MachinistsUnion and we pledge to carry on his legacy.

Lewis, along with the Rev. Dr. Martin Luther King, were leaders in the civil rights movement of the 1950s and 60s. In 1965, a historic day that would become known as Bloody Sunday, Lewis was viciously attacked by Alabama state troopers as he and other civil rights demonstrators marched across a bridge in Selma on their way to Montgomery. The violent event would be a catalyst in helping to usher in the Voting Rights Act later that year.

“I felt like I was going to die,” remembered Lewis.

In 2016, in just one example of his advocacy on behalf of IAM members, Lewis publically rebuked a major federal contractor of the U.S. Labor Department that initially refused to negotiate in good faith with members at IAM District 131 in Georgia.

We mourn a champion for working people who fought every day of his life to fulfill the promise of America.