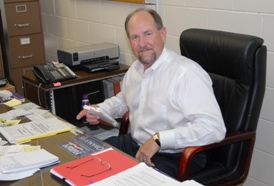 The IAM and Local 709 in Marietta, GA, are mourning the untimely passing of Local Lodge President and DBR Jeff Goen, 55, who died on Oct. 30, after a brief illness.

Employed by Lockheed Martin for 30 years, Goen was initiated as an IAM member in December 1976 and served in numerous union capacities before being elected in 2007 as president and directing business representative of Local 709. Jeff also served with distinction as a member of the current IAM Law Committee, alongside Ellen Arbogast, Jim Beno, Stan Pickthall and Phil Zannella, Jr.

“Jeff was a good friend and an outstanding advocate for this union and its members,” said Headquarters GVP Rich Michalski. “He had a keen understanding of local and national politics and how they could affect his membership. He lobbied relentlessly for defense programs like the C-130 and the F-22, and was a frequent and forceful voice in Washington, D.C. for his members and his community. His friendship, good humor and enthusiasm will be deeply missed.”

Goen is survived by his wife of 31 years, three children and eight grandchildren.

“Jeff truly was a rising star in the IAM,” said Southern Territory GVP Bob Martinez, Jr. “As president of Local 709, he demonstrated an ability to lead and resolve problems that was unique. I sincerely hope everyone will keep Jeff and his family in their prayers.”