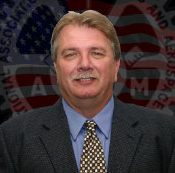 The IAM mourns the sudden loss of District 9 Business Representative Mike Musgrove, who died Saturday, September 26, 2015 after suffering a fatal blood clot while doing something he loved – attending races at the Gateway Motorsports Park in Madison, IL.

Musgrove was a 36-year member of IAM Local 777, beginning his career in 1979 as a Journeyman Technician and serving as a shop steward at several St. Louis-area auto dealerships. He became an Organizer for District 9 in 2004 and a Business Representative in 2010.

“So often we give so much of ourselves. Mike Musgrove gave his all to his family, his friends and his union,” said IAM Midwest Territory General Vice President Philip J. Gruber. “Mike was a tremendous person and an asset to our organization.”

“This is a great loss to the District 9 and IAM family, as well as to the automotive members Mike represented at auto dealerships throughout the St. Louis Area,” said District 9 Directing Business Representative Tony Rippeto. “Mike was a great colleague and will be greatly missed. May he rest in peace.”