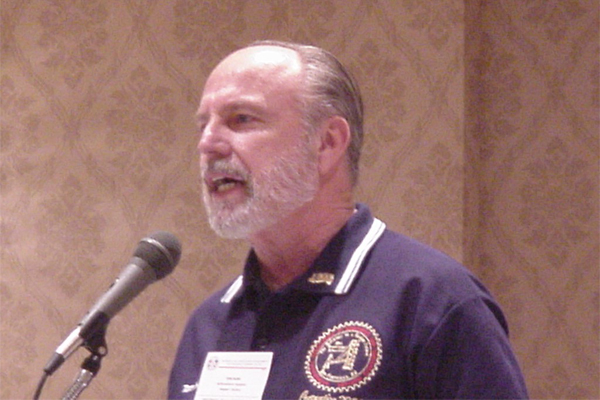 “The IAM has lost a great leader,” said IAM International President Robert Martinez Jr. “He was an important representative in this union, the Western Territory and in the aerospace sector. We will all surely miss Brother Tom Hurd.”

Brother Hurd began his journey in the IAM when he joined Local Lodge 755 in December of 1961. He first was elected to serve the membership as Conductor in January of 1968. Tom served his co-workers in a variety of capacities, including Recording Secretary, Negotiations Committee Member, California Conference Delegate, Grand Lodge Convention Delegate, Vice President and President of Local 755. He served as Local President for four terms until his election to Business Representative for District Lodge 50.

Tom was serving in his third term as Business Representative when he accepted an appointment as a Grand Lodge Special Representative from IAM International President William W. Winpisinger in 1987. Brother Hurd progressed to the position of Grand Lodge Representative, and in 1997 was appointed Administrative Assistant to General Western Territory General Vice President Lee Pearson.

Over the years, Tom worked hard for the membership. One of his proudest battles was his fight to gain Trade Readjustment Assistance for members laid off from Rohr Industries. He won these benefits, and hundreds of thousands of dollars were paid to members adversely affected by the outsourcing of work to Mexico. Rohr eventually closed their plants in Mexico and moved the work back to the U.S., where it belonged.

As Grand Lodge Representative, Tom was Overall Coordinator for McDonnell, Rohr/BF Goodrich, and Aerojet General. Tom represented the membership of the IAM in true journeyman fashion, dedicating himself to improving the lives of working families for 41 years. Tom retired from the IAM in 2002 and became a lifetime member in 2011.

At Tom’s request, there are no services planned, however he was a great supporter of Guide Dogs of America and an avid animal lover. If you’d like to remember him, a good way would be to donate to GDA.