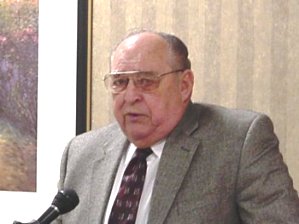 Long-time Ohio State Council of Machinists President Harold Langford of Galion, OH passed away today at the age of 77. Langford, a 54-year member, was also serving as Local 1151’s President.

One of the IAM’s most veteran and treasured activists, Langford joined the IAM in 1956 when he went to work for Galion Iron Works. It wasn’t long before he was serving his fellow IAM brothers and sisters. He held many titles over the years, and from 1968 to 1986, he served as Business Representative of former District Lodge 59. In 1986, he was elected Directing Business Representative of District 59 until his “retirement” in 1993.

“Harold was a Machinist through and through,” said IAM President Tom Buffenbarger.

“His enthusiasm and dedication to our union and his members never waned. His idea of retiring was to keep serving his brothers and sisters. This is a great loss to his family, our union, the labor movement, and to me, personally. Harold was one of a kind and he will be truly missed.”

Langford also was an active Delegate to the Crawford/Richland Counties Central Labor Council. “Harold Langford was an icon here in Ohio,” said IAM Eastern Territory GVP Lynn Tucker, Jr. “He dedicated his life to making things better for others. He encouraged us all.”

Brother Langford is survived by his wife Ollie, his daughter Olma Sue, and three grandchildren