Andy Barnes joined the IAM in 1962 when he hired into the Pacific Pumping Company near San Francisco, CA. He promptly became involved in the union, and served in many capacities, including local lodge president, organizer and Business Representative. Barnes was appointed to the Grand Lodge staff in 1979, and served as Grand Lodge Representative until his retirement in 1999.

“Andy was one of my mentors, and always went out of his way to share with the younger representatives,” said IAM Western Territory GVP Gary Allen. “Thousands of families are living a better life today because he stood up for them.” 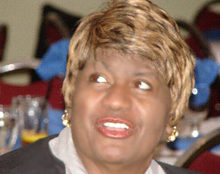 Gloria Carter went to work for the City of Long Beach, CA, in 1979, and it wasn’t long before she was standing up for fellow workers’ rights. That led to her becoming a charter member and leader of the City Employees Association (CEA). In 1987, it was Carter who helped facilitate the merger of the CEA into the IAM. Carter also served on the Board of Trustees for the Los Angeles Machinists Benefit Trust Fund and as a District Delegate. In 2003, she was honoured by now-retired GVP Lee Pearson for her efforts in organizing new members.

“Gloria was a dynamic spirit in every campaign she worked on,” said GVP Allen. “She had a rough battle these last few years, but she continued to lift the spirits of others, and we all are better off because we got to share the path with her.”