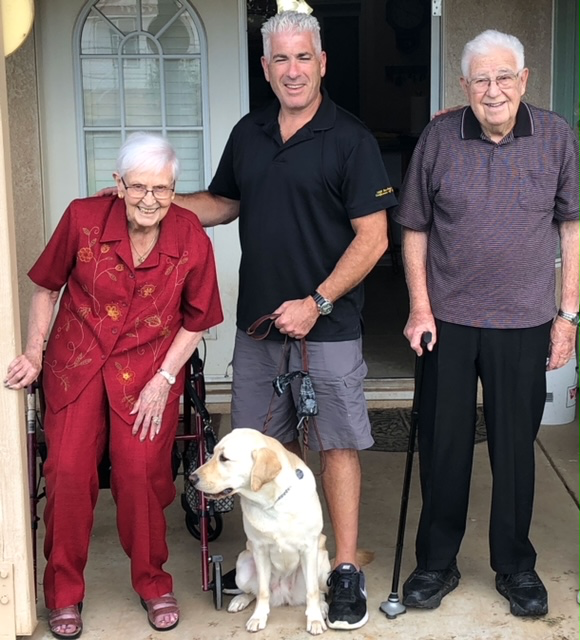 The IAM is deeply saddened to learn of the passing of GDA|TLC President Emeritus Merrill “Bud” Melvin. Bud passed away on Thursday, December 1, 2022, at 92. Few people are more important to GDA|TLC’s history than Bud.

Bud began his career in Los Angeles as a railroad machinist, working his way up from the shop floor to General Chairman of District Lodge 19. In 1982, Machinists (IAM) President William W. Winpinsinger tasked  Bud with saving the school. When Bud assumed his role as President, International Guiding Eyes (IGE) had only $7,000 in the bank, yet it cost $70,000 a month to operate.

Bud immediately started working to save the school from bankruptcy. His first accomplishment was securing an interest-free loan from the IAM, saving IGE $1.3 million in interest payments. Bud famously created the first Las Vegas fundraiser, asking attendees not to come to reduce costs. The dinner raised over $100,000.

“The IAM and GDA/TLC family have lost a legend and amazing railroad machinist,” said IAM International President Robert Martinez Jr. “Brother Melvin’s vision helped keep the IAM’s favorite charity GDA/TLC, in good standing. “He dedicated his life to bettering the lives of countless students and their guide dogs. “Our union is also grateful for his service to the IAM and thousands of Fighting Machinists working on the railroad.”

Bud worked to get IGE recognized as an official charity for the combined federal campaign, allowing federal workers to make monthly donations. He solicited involvement from Hollywood, orchestrating publicity from stars such as Betty White, David Hasselhoff, and Heather Thomas. As proud as Bud was of the financial rebound, he was even more proud of another statistic: IGE was graduating 60 teams of guide dogs and students each year.

Before he retired, Bud had one final contribution to make to IGE. Noticing that other Guide Dog schools were raising significantly more from the combined federal campaign, he realized the school’s name was confusing people and inhibiting fundraising. At Bud’s direction, the school changed its name in 1992 to Guide Dogs of America.

“The school’s turnaround under Bud’s leadership was nothing short of remarkable; without his perseverance and dedication, the school would most likely not exist today,” said Guide Dogs of America/Tender Loving Canines President Russ Gittlen. “I stand on the shoulders of President Emeritus Melvin. We might not exist without his leadership and the relationships he created to help the GDA/TLC organization continue our mission of transforming lives.”

The Melvin family requested that donations be made in Bud’s memory to GDA|TLC in lieu of flowers. Please keep Bud’s family in your thoughts and prayers during this difficult time.