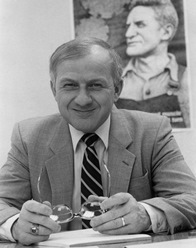 Val Bourgeois, the first IAM Canadian General Vice President to be elected by Canadian members, has passed away at the age of 84.

Bourgeois served two terms as Canadian General Vice President, first elected in 1985 and then again in 1989.

Bourgeois first joined the IAM with Local 594 in Moncton, New Brunswick, his hometown, in 1952 as an apprentice machinist at Canadian National Railways. He was first elected as president of his Local in 1966 and the following year was elected part-time General Chairman for the IAM Railway District in Atlantic Canada. He also served as Secretary-Treasurer of the New Brunswick Federation of Labour for six years. In 1969 he was appointed to the IAM field staff as a Grand Lodge Representative, based in Montreal.

In 1981, Bourgeois was named Administrative Assistant to the then-IAM General Vice President and moved to the union’s headquarters in Ottawa.

“Val’s commitment to our members and working Canadians as a whole was second to none,” said Dave Ritchie, who succeeded Bourgeois in 1995 as Canadian General Vice President. “He was a tireless worker on the international level, establishing global standards for the transportation industry.”

Bourgeois is survived by his wife, Marguerite, and his six children and five grandchildren.