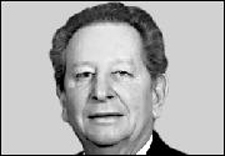 Presser joined IAM Local 1862 while working at the Ladish Company in Cudahy, WI, shortly after high school in 1947. He left for a six-year stint to serve in the U.S. Army. Upon returning, he returned to Ladish where he served as Steward, Chief Steward, Secretary-Treasurer and Local Lodge President.

While Presser dedicated his professional life to improving workers’ rights and social justice, his true love and devotion was his family. He is preceded in death by his wife of 53 years, Mary, and survived by his six children and numerous grandchildren.

“Anyone who knew Dick knew he was at his happiest on weekends having his family over for swimming and barbeques,” reads an IAM District 10 statement. “Our condolences and thanks go out to the Presser family for having shared this remarkable man with the IAMAW for all these years.”

“Dick was a true trade unionist dedicated to the working families of the IAM and entire state of Wisconsin,” said IAM Midwest Territory General Vice President Philip J. Gruber. “He’ll be greatly missed. Our thoughts and prayers are with his family during this difficult time.”