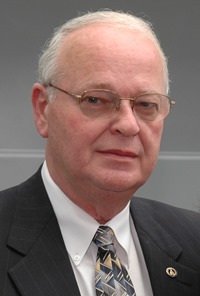 It is with great sadness that the IAM learned today of the passing of retired General Vice President Robert Thayer.

“Bob Thayer will be long remembered and greatly missed by his many friends in the IAM,” said IAM International President Bob Martinez. “Bob was a close personal friend and a true mentor. All of the Machinist family grieves his loss, and we will keep him and his family in our thoughts and prayers.”

Thayer began his career in 1965 as an electronic assembler and tester at the Brown & Sharpe Co. in Rhode Island and initiated into IAM Local 1142. He was elected Shop Steward in 1966, Local Vice President in 1970, and served as Local President from 1973 through 1978.

After serving many years as a Grand Lodge Representative in the IAM Eastern Territory, Thayer was elected General Vice President and served over all of IAM Headquarters staff including the William W. Winpisinger Education and Technology Center until his retirement in 2006.

Funeral arrangements will be made available as soon as they are complete.