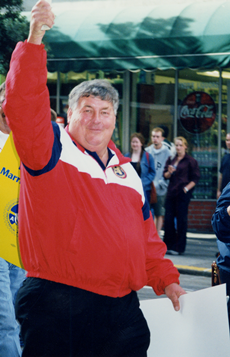 It is with a heavy heart that the IAM learned of the passing of retired Southern Territory Administrative Assistant Leslie Gene “Les” Schroeder.

“It’s difficult to explain how much Les meant to me and to the Southern Territory,” said IAM International President Bob Martinez. “He was a mentor and a friend. He cared deeply for the members of our union, and kept his focus on doing right for them. Through his life, he stood up for the working man and woman. Les has a great family, and they were so important to him, and all of us in his Machinists Union family join them in grieving for him.”

Memorials may be made to Guide Dogs of America. Memorial to be announced at a later date at St John Lutheran, Mansfield, TX.