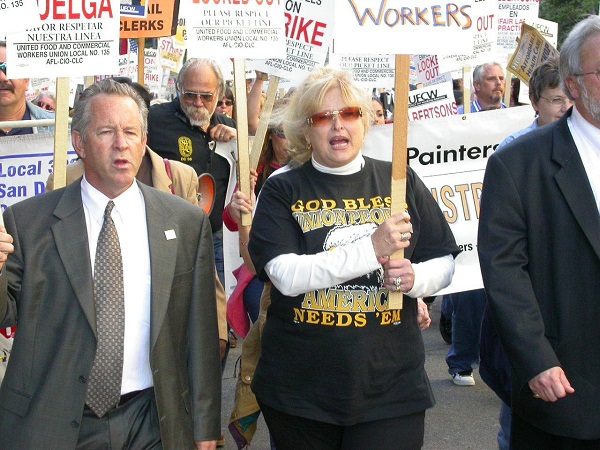 Last week the Machinists Union family lost a well-known and beloved leader, Virginia Cobb.  Anyone who met the strong and vocal activist will never forget her.

Sister Cobb began fighting for working families in 1961, when she was hired by General Dynamics Astronautics and voluntarily joined IAM Local 2218. She was appointed shop steward as soon as she completed her probation and never looked back. Virginia held many leadership positions in Local 2218, Local 1125 and District 50, including Recording Secretary, District 50 Delegate, Negotiator and San Diego-Imperial Counties Labor Council Delegate — a position she held for 51 years.

“We were honored to have worked with Virginia and are forever thankful for her tireless efforts of fighting for working people,” said Western Territory General Vice President Gary Allen. “She will always be remembered as a true Fighting Machinist.”

“Virginia Cobb was such a unique, strong and powerful voice for the working people of our great union,” said International President Bob Martinez. “She was ahead of her time, and the Machinists are a stronger organization because of her.”

Cobb was elected Business Representative in 1973 – one of the first women elected to that position in the Machinists Union — and she served and/or chaired numerous committees, including the San Diego City College Labor Advisory Committee, International Labor Affairs Committee, National Planning Committee of MNPL, Human Rights Committee (Local Director), Industrial Relations Research Committee and the Central Labor Council Education Committee. She served on the Executive Board of the San Diego-Imperial Counties Labor Council for 20 years.

Appointed as District Lodge 725 Area 1 Director in 1995, Virginia was responsible for negotiating and enforcing numerous collective bargaining agreements with employers in the private sector, federal sector and Service Contract Act sectors. Her service contract CBAs were widely used as templates by other IAM representatives across the country.

Through aggressive bargaining and arbitration, she earned the respect of employers, our members and the labor community at large. Virginia loved to share her immense knowledge, and she mentored dozens of young trade unionists over the course of her career, many of which now serve as full time representatives for District Lodge 725 in California.

Virginia passed away unexpectedly at her home on September 26, 2017. She will be profoundly missed.