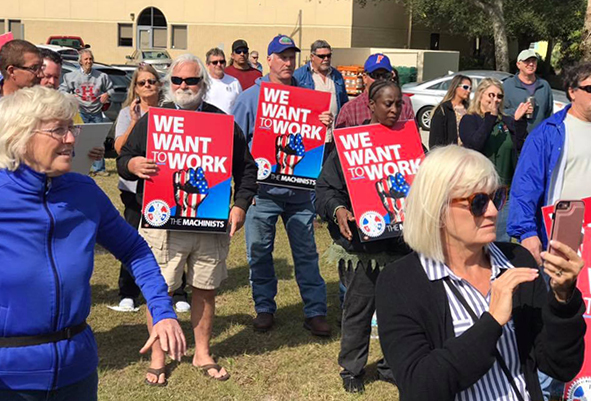 Machinists Union members who work at NASA as federal contract workers held a rally this weekend calling on Congress to swiftly pass legislation that grants back pay to federal contractors, just like federal workers.

The rally, hosted by IAM District 166 and Local 2061 in Cape Canaveral, FL, included IAM leadership, members, small federal contractors, local elected officials and members of the Space Coast community. The IAM also partnered with the Space Coast AFL-CIO and other community groups to collect/distribute food donations for workers impacted by the government shutdown.

A Solidarity Rally was held today at District Lodge 166 for IAM members that work at the Kennedy Space Center. The rally…

The IAM has called on Congress to guarantee back pay for federal contract workers.

TAKE ACTION: Ask your member of Congress to co-sponsor the Fairness for Federal Contractors Act of 2019 (HR 824)

NASA is reopened, but thousands of contractors are still waiting on paychecks https://t.co/gchVDEjHi8

“The Machinists Union proudly represents thousands of federal contract workers who provide critical services to several government agencies from NASA to the FAA,” said Machinists Union International President Bob Martinez. “They are hard-working, dedicated employees who deserve equal treatment. These men and women work side-by-side with their government counterparts, motivated by the same goals of public service and safety. They deserve to be treated the same as federal workers.”

Federal contract workers deserve back pay, just the federal employees they are proud to work with. We are working aggressively to right this wrong. My full statement: https://t.co/G4bltugedx pic.twitter.com/VBarxIgj3S

“I will call this shutdown exactly what it is… a man-made disaster,” said Machinists Union Southern Territory General Vice President Rickey Wallace. “There is no reason why we should have to collect food here today for folks like our hard-working Machinists Union members who support critical government operations like NASA. A three-week reprieve from the chaos inflicted on our families and our community is not something to cheer about.”

“I want to remind everyone, this is our third shutdown that we have been impacted by in the last 12 months,” said Ed Grabowski, IAM Local 2061 President. “I am a proud U.S. Army veteran, and so is a large portion of the IAM Local 2061 membership. On one of our earlier shutdowns, some of our members on other contracts did not receive back pay for the pay they missed. This is unacceptable, we must all do our part since we only have a three-week reprieve. We must contact our elected officials, and encourage our family and friends to do the same.”

WATCH: “This is About Fairness”: Kennedy Space Center Contractors Rally for Back Pay

IAM District Lodge 166 held a rally this past weekend urging Congress to give federal contractors the back pay they deserve. IAM members at Kennedy Space Center in Florida fall under this umbrella, which means currently they will not receive back pay for the time the government was shutdown. The IAM has taken the lead, drafting legislation to help get these workers paid. IAMAW Southern Territory