IAM, NFFE-IAM, AFGE, Others Rally to Save OPM 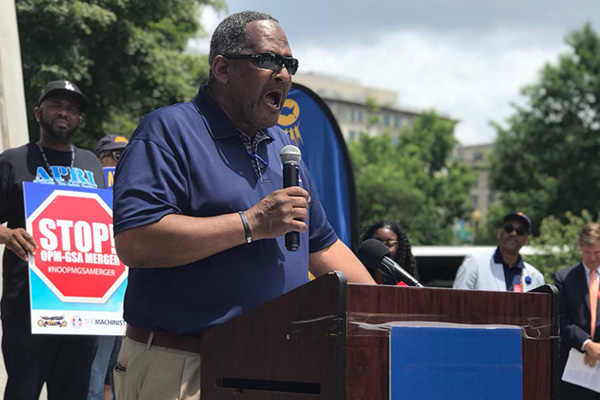 IAM, NFFE-IAM, AFGE, and other unions held a rally to save the Office of Personnel Management (OPM), the federal government’s human resources agency. The White House has recently threatened to abolish the OPM. The OPM provides critical support for government employees in all branches of the federal government.

This proposed power grab by this White House may cause serious issues on how the OPM processes federal employee health and retirement benefits and security clearances. And it politicizes the hiring process for the federal government by destroying the merit-based civil service system, including the diversity and recruitment policies.

The rally was in response to a recent threat from President Trump to furlough or layoff federal employees and contractors who work at OPM unless Congress withdraws its bipartisan resistance to his plan.

“In regards to the power grab at OPM, we need stand up and speak out, we need the help of our allies in the Congress and we need to encourage our brothers and sisters in the private sector to stand with us,” said James E. Price Jr., IAM Director of Government Employees. “While it may be hard-working federal workers today, it will be the private sector tomorrow!”

“We are dealing with a president who would rather layoff American workers instead of admitting that his so-called plan to break up the government’s human resources department is fatally flawed and without legitimate purpose,” said NFFE-IAM National President Randy Erwin. “OPM was created to protect the career workforce from patronage, discrimination, corruption, and political overreach which ultimately ensures that the U.S. government works for all Americans, not just the affluent or politically connected. This move would achieve the exact opposite.”

.@APRI_National members are rallying in DC to stop the @USOPM @USGSA merger! #NoOPMGSAMerger #1u pic.twitter.com/m1IFQkpg0k

Thanks to all those who came to fight against the Trump administration’s plan to dismantle ⁦@USOPM⁩ and the apolitical civil service!