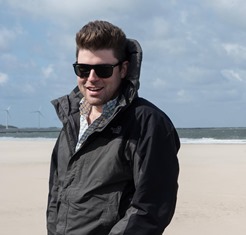 The IAM and the National Federation of Federal Employees (NFFE-IAM) are mourning the tragic death of NFFE-IAM Assistant General Counsel Philip Snodgrass, 27, who on Monday, February 23 was struck and killed by an erratic driver who drove off a street and onto a sidewalk in downtown Washington, DC.

Snodgrass was on his way to the Georgetown Law Center where he was taking classes to receive his Masters of Law degree. Another pedestrian was injured, as was the driver.

“Phil was a young and talented member of the NFFE family, and he had an outstanding legal mind,” said NFFE-IAM President William Dougan. “Since starting as a full-time employee years ago, he provided NFFE-IAM members superb service through countless workplace and legal proceedings around the country. We are devastated by the loss of our brother. Our thoughts and prayers are with Phil’s family and friends during this difficult time of grieving.”

Snodgrass was hired in 2013 after previously interning at NFFE while pursuing his degree at the Northeastern University School of Law in Boston and had long-since advocated for federal workers’ rights. During his time as NFFE’s law clerk he worked on a wide variety of cases before federal courts, administrative agencies and arbitrators.

One of Snodgrass’s most recent assignments was helping 1,300 State Department passport adjudicators negotiate their contract.

“The IAM and NFFE families are in shock at this tragedy that took one of the labor movement’s brightest young talents. Phil was a true champion for working people who was already making his mark on the lives of hard-working federal employees,” said IAM International President Tom Buffenbarger. “Our hearts ache for Phil’s family and we will miss him dearly.”

“Phil was a young man that will leave a lasting legacy despite his short time working with us at the IAM and NFFE,” said IAM General Vice President Bob Martinez, Jr. “His dedication and fervor for fighting for federal employees was infectious. We will sorely miss his presence.”