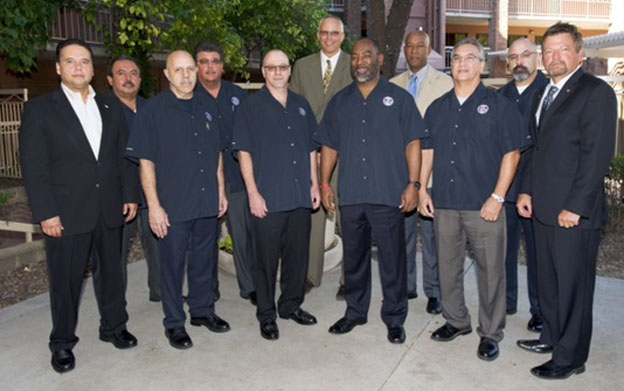 IAM Western Territory General Vice President Gary Allen opened IAM Local 933 negotiations with Raytheon Missiles Systems in Tucson, AZ with a reminder to the company of the extremely technical and highly skilled work our members perform, and the role our members play in helping Raytheon build their company and remain profitable. Allen called on the company to bargain in good faith to produce a fair contract that will work for everyone.

“Our members from Old Pueblo Lodge 933 have made countless sacrifices and have gone above and beyond for this company,” said Allen. “Our members are extremely proud of the quality work they do for the men and women of the armed services who defend our freedoms. Their hard work, grit and determination deserve fair compensation and a fair contract.”

IAM Aerospace Coordinator Jody Bennett, Western Territory Grand Lodge Representatives Steve Cooper and Steve Nickel, along with Local 933 Directing Business Representative Louis Martinez were all on hand for the opening of the negotiations.

“Raytheon is a premier missile manufacturer in our country, and they are in a better financial position than they have been in years,” said Martinez. “It’s time for them to step up to the table and provide a labor agreement we can all be proud of.”

“Our collective bargaining agreements are some of the best in the labor movement,” said Bennett. “We are always looking at ways to further protect the livelihoods of our members and their families. The addition of the IAM National Pension Plan into this contract would provide a tremendous safeguard for our members’ futures.”

Raytheon Co., with 2014 sales of $23 billion and 61,000 employees worldwide, provides state-of-the-art electronics, mission systems integration and other capabilities in the areas of sensing; effects; command, control, communications and intelligence systems; as well as cyber security and a broad range of mission support services.