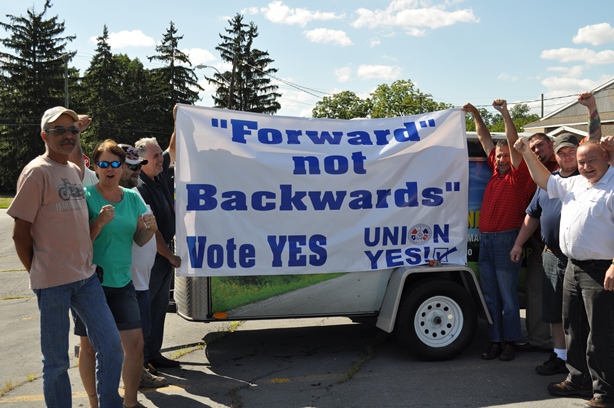 The IAM’s latest organizing win at Letterkenny Army Depot in Chambersburg, PA was the culmination of a unique pilot program that included multiple IAM territories, districts and departments, as well as key support from NFFE-IAM.

On July 30, workers employed by Bowhead Support Group at the Letterkenny Army Depot voted overwhelmingly for the IAM in a representation election conducted by the National Labor Relations Board (NLRB). The group includes nearly 1,000 welders, electricians and machinists in addition to vehicle and equipment repair technicians.

“While the Eastern Territory may have been the beneficiary of this particular effort, it is expected that similar campaigns will soon result in additional IAM organizing wins from coast-to-coast,” said Eastern Territory GVP Lynn Tucker, Jr. who worked with Headquarters GVP Bob Martinez and NFFE-IAM President Bill Dougan to create the pilot program. “The goal from the start was to take advantage of the IAM’s deep experience in the Service Contract area.”

A key objective of the pilot program was to turbocharge an organizing effort at a U.S. military facility where NFFE-IAM- represented employees were already present and working under a collective bargaining agreement.

“The campaign at Letterkenny met all the parameters of the pilot program and before long, IAM Organizers, Aerospace Coordinators and District Lodge 1 staff were working side by side with NFFE-IAM Local 1429 members to educate the workers inside the facility about the benefits of IAM representation,” said IAM Headquarters GVP Bob Martinez.

When Election Day finally arrived, the vote was an overwhelming 485-144 in favor of the IAM. Under NLRB election rules, results are determined by a simple majority of those casting ballots.

“This was a team effort that resulted in a victory for the Machinists Union and the workers at Letterkenny,” said Tucker.” But it would not have been possible without the help from NFFE-IAM Local 1429, GLR Gary Anthony as well as District Lodge 1 Directing Business Representative Danny Chmelko and his staff. I would also like to add my personal thanks to GVP Bob Martinez, NFFE-IAM President Bill Dougan and the IAM Executive Council for the inspiration and resources that made this win possible.”